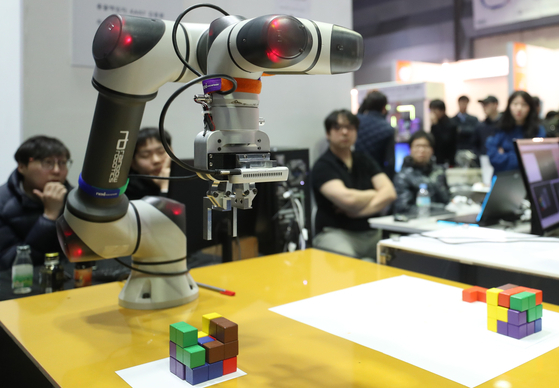 Visitors look at a robotic arm at an industrial technology exhibition in Coex in southern Seoul in 2019. [YONHAP]


Korea has adopted industrial robots more quickly than the United States, Japan and Germany — so fast that it's starting to affect the employment rate for humans and even their wage increases.

According to a research report released Wednesday by the Bank of Korea, Korea got serious about robots after the 2008 global financial meltdown, and its adoption rate has been faster than most other countries.

The robot density in Korea — the number of robot installations per 1,000 employees in manufacturing — increased steeply after the financial meltdown. 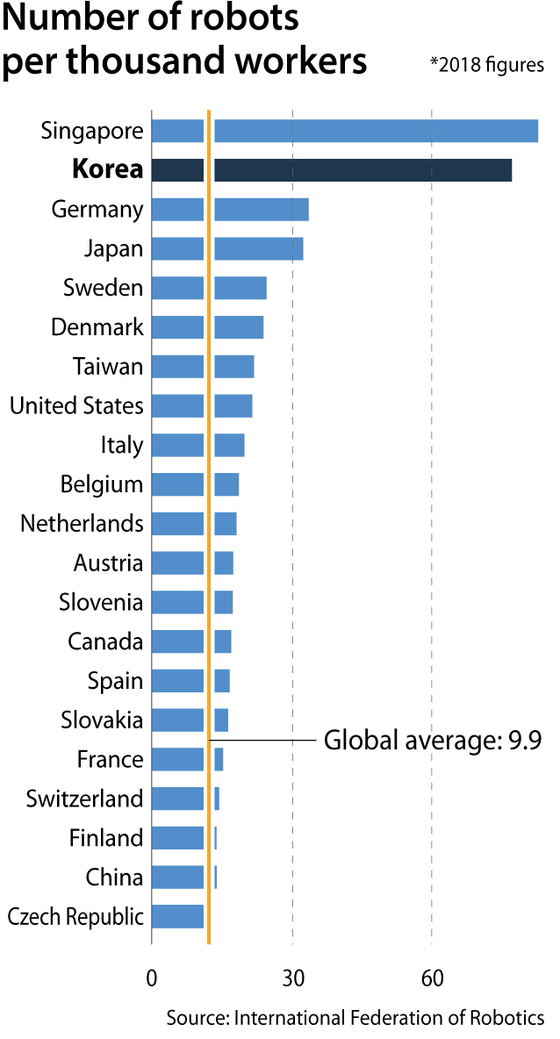 Korea was faster to adopt robots because of its heavy concentration on manufacturing.

Based on 2019 data, electric and electronic products including chips and display materials, petrochemical products and transportation equipment accounted for more than half of the country's manufacturing production. In those industries, it is relatively easier for robots to replace human workers as many of the tasks involved in production are simple and repetitive, the report said.

Also, in these industries, labor costs are relatively high and companies can save by replacing humans with robots.

The declining price of robots helped Korea speed up installations. The price of industrial robots globally fell from $63,000 per unit in 2009 to $39,000 in 2018, by 38.6 percent, according to data from the International Federation of Robotics.

According to the central bank's report, Korea's labor market is already feeling the effects of a wider adoption of industrial robots — in a reduction in jobs and wages for humans.

The report uses a so-called adjusted penetration of robots index, which shows an adjusted number of robots per 1,000 workers in manufacturing regardless of industry-related variables including sudden growth in workforce.

"The index is used to find the direct influence of robots on jobs as it rules out changes in production or job growth due to an industry's overall expansion," said Kim Yong-bok, head of the macroeconomics team at the central bank's Economic Research Institute.

With the use of industrial robots expected to increase with the development of robot engineering, artificial intelligence and other digital technologies, senior economist Kim Tae-kyung of the Bank of Korea, the author of the report, said industries need to find new ways to leverage the increased productivity of the robots to increase jobs for humans.