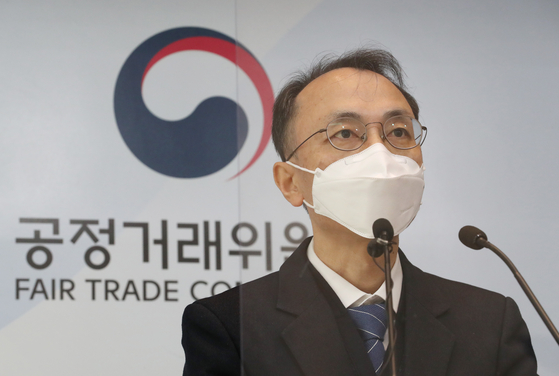 Hwang Yoon-hwan, an offical at the Fair Trade Commission holds a press breifing at the government complex in Sejong on Wednesday related to video streaming services customers refund. [YONHAP]

Canceling a streaming service contract will now be easier after the Fair Trade Commission (FTC) crack down on unfair contracts that locked customers in.

Wavve is an online video streaming service that was jointly created by SK Telecom and the three Korean broadcasting companies – SBS, KBS and MBC — while Tving is a service created by CJ ENM and Seezn by KT. Watcha is a local start-up funded by Kakao.

“Especially in the case of Netflix, even if a customer cancels the service midway, they didn’t get refund and were forced to use the remaining days,” said Hwang Yoon-hwan, a consumer protection executive at the FTC.

The FTC interpreted these terms as unfair practices that limited a consumer’s right to cancel services.

“From now on, customers will be allowed to get refund if their cancel the services within seven days of payment.”

Wavve, Tving and Seezen had terms that required subscribers to pay penalty when canceling services, such as charging them for 10 percent of the remaining days.

That means that the person will only get 5,904 won refund. The changes will allow the user to get a refund of 6,642 won.

The three video streaming services — Wavve, Tving and Seezen — as well as Watcha also had terms in which it paid alternatives such as cyber money instead of actual money in case of a refund.

The FTC director stressed that unfair business practices committed by video streaming services have been increasing, including failure to meet the minimum standards on refunds.

The FTC started the investigation after subscriptions to online video streaming services surged, particularly since last year as many people were restricted to their homes due to Covid-19.

Paying Netflix subscribers are estimated to have doubled between 2019 and 2020 from 2 million to now over 4 million.

Market researcher WiseApp estimated that Koreans spent 500 billion won on Netflix service, which is a 108 percent year on year increase.

With more people watching online video streaming, complaints have surged. The number of complaints rose from 188 in 2019 to 590 in 2020.

It is likely that the new refund policy will be implemented at Netflix around March.

“The new refund policy term is only applied in Korea,” said Hwang. “As it is well known, Netflix is a global company that provides its service to 190 countries. But the current system is applied around the world. Netfilx says it needs to make changes including with its system and interfaces, which compared to other [OTT companies] would take time.”