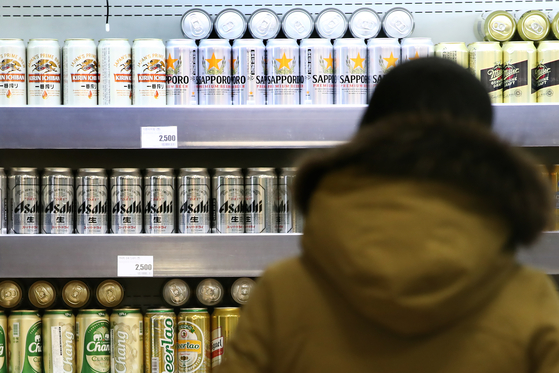 Japanese beers on sales at a discount mart in Seoul on Thursday. [YONHAP]

Japanese beer is fast losing share in the Korean market as drinkers shun the suds from across the East Sea.

In 2020, only $5.67 million worth of Japanese beer was imported, down 85.7 percent, according to Korea Customs Service.

It was the second consecutive yearly decline, and Japan now ranks ninth among imported beers.

The top position is held by Dutch beers, as $40.7 million worth was imported from the Netherlands. American beer ranked second at $34.9 million. Chinese beer took third place at $32.3 million, and Belgium beer ranked fourth at $26.7 million.

Japanese beer once dominated the import market but has been losing ground as disputes between the two countries have inspired some Koreans to avoid Japanese products.

“More Japanese beers are put up for sale at convenience stores,” said an official in the beer industry, who requested anonymity. “However, it has not yet reached a point where a major promotional event could be held.

“For the time being, it will be difficult for Japanese beer imports to recover significantly.”