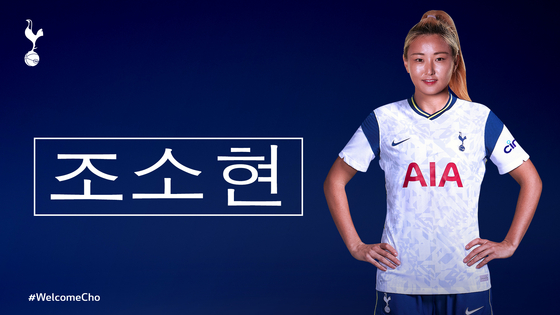 An image released by Tottenham Hotspur to welcome Cho So-hyun to the team. [TOTTENHAM HOTSPUR]


Taeguk Ladies captain Cho So-hyun has joined Tottenham Hotspur F.C. Women on loan from West Ham United for the remainder of the 2020-21 season.

Midfielder Cho joined West Ham in January 2019 and has made 33 appearances for the club. As well as being strong in midfield, Cho is known as a clutch penalty taker, having taken West Ham through the 2019 FA Cup semifinals and former club INAC Kobe Leonessa to Empress's Cup victory with decisive spot kicks.

After starting her career with Suwon, Cho moved to Japan in 2016 before returning to Korea briefly before signing with Avaldsnes IL in the Norwegian top tier in 2018, before heading to West Ham.

Cho is one of the most consistent members of the national team. At 32 years old, she has made 126 appearances for the Taeguk Ladies, making her the most-capped player ever, and has scored 20 goals. She captained the national team to their first-ever World Cup knockout round in 2015, and has continued to lead the squad ever since.

Cho will wear the number 11 shirt for Spurs. The London club have the option to make the loan permanent at the end of the season, so Cho could become the second Korean player with a permanent spot on Spurs' books, alongside Son Heung-min.

If the loan is approved by England's Football Association, Cho will appear for Spurs Women in their game against Chelsea, home of Taeguk Ladies teammate and top goal scorer Ji So-yun, on Sunday.

Parting with the ‘special one’ (KOR)