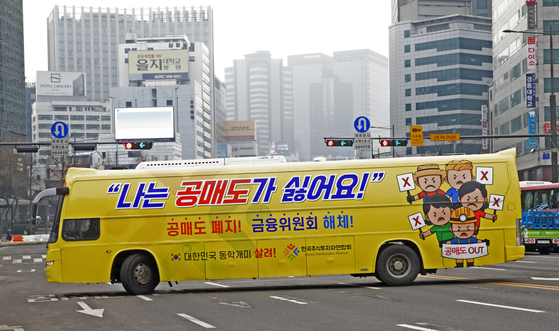 The Korea Stockholders Alliance, a group of local retail investors, operates a bus decorated with slogans promoting the short-selling ban at Gwanghwamun in central Seoul on Monday. [YONHAP]


Celltrion shares rose by 14.51 percent Monday as a group of local investors said they were about to mount an attack on short-sellers, in much the same way a swarm of chatroom activists pumped up the price of New York-listed GameStop to both punish those who bet against the company and profit from the price action.

On Monday morning, an organization called the Korea Stockholders Alliance published a video online vowing to "wage war" against short selling to level the playing field for retail investors. The nonprofit army, with some 32,000 gathering in a Naver Cafe, called other small investors to show their power by pushing up prices of heavily shorted stocks including Celltrion.

While it is not clear whether they actually bought shares as threatened, the possibility of a stock mob descending on heavily shorted shares may have been enough to scare those who had bet against the targeted stocks to reverse their positions, which would have driven up prices.

"It is likely foreign and institutional investors hurried for short covering on fears of a potential buying spree by retail investors," said Nam Sung-jin, director-general of the market oversight division at the Korea Exchange in a phone call with the Korea JoongAng Daily on Monday.

The division deals with unusual movements in stock prices.

Short selling is when an investor borrows stock and sells that stock immediately in hopes of buying it back later at a lower price, repaying the loan and profiting from the difference. If the price of the stock rises, investors who have shorted lose money. If they unwind their bet, they have to buy the shares in the market, further driving up the price.

Last week, crowds of retail investors in the United States piled into heavily shorted stocks in a coordinated effort to force the short-sellers to get out, thus turbocharging the rally. They did this to a number of stocks, including GameStop, Tootsie Roll Industries and AMC.

While short selling is temporarily prohibited in Korea, some bets were in place before the practice was restricted in early 2020. Market makers can also sell short.

The Korean stock gang said it was starting a forum called "kstreetbets," named after "WallStreetBets" of Reddit, the online community that inspired retail investors to pump up stock prices of GameStop and wreaked havoc on institutional investors that went short on the company.

Celltrion was picked as a target as it had the largest borrowed stock position, which indicates short sales are in place, as of Jan. 27, according to data from the Korea Exchange. Major investors short on Celltrion were Goldman Sachs International, Merrill Lynch International and Morgan Stanley International.

Kosdaq-listed HLB was also selected for the same reason. As of Jan. 27, over 313.8 billion won ($280.5 million) worth of its shares were on loan. Major investors short on HLB included Merrill Lynch International, Morgan Stanley International and Citi Group Global Markets.

"With kstreetbets, we will make and execute strategies to wage war on the short-selling system," said Jung Eui-jung, head of the Korea Stockholders Alliance in statement Monday. "We have a solid purpose of punishing hedge funds that played with the rules of the capital market for years through short selling."

On the surge in action by equity insurgents, local financial regulators are upping the monitoring of the groups as well as stock price fluctuations.

While retail investors net sold on Monday, their buying patterns could change toward the end of the week.

On whether the recent movement could be considered illegal manipulation of stock prices, Nam said "it is yet hard to tell."

"Investors can manipulate stocks through various methods such as spreading rumors, but in this case, the group has openly announced they will fight short selling, and retail investors can voluntarily follow or not follow," Nam said.

"Whether it could be considered an illegal move will be determined based on future moves by the group," a law professor who requested anonymity said. "Declaring war against short selling could be considered freedom of expression, but if the group comes up with organized action plans to disturb prices, there is a possibility the movement can be considered illegal."

Short selling was the subject of much debate even before the recent action.

The Financial Services Commission is still mulling whether to lift the ban or keep it as criticism by retail investors grows and some ruling party lawmakers side with retail investors ahead of the April by-elections for the mayors of Seoul and Busan.

Apart from the comments made by the retail investor group, Celltrion reported news Monday that may also have affected the price of its shares. It announced that Canada's health authority gave the green light for it to sell the subcutaneous version of its Remsima drug, a biosimilar copy of Janssen Biotech's Remicade. The approval was for the treatment of rheumatoid arthritis with the drug. Celltrion plans to seek approval for its use for other autoimmune diseases as well.