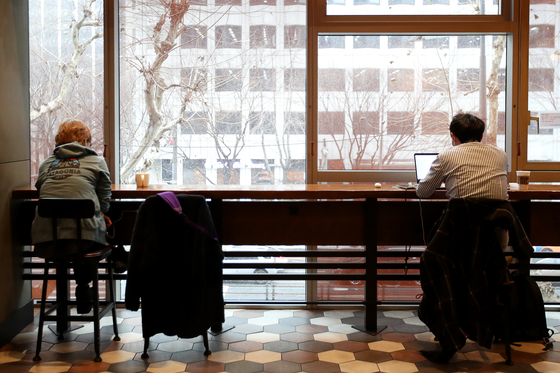 
A 53-year-old man has been running a number of coffee shops for 10 years in Gwanak District and Gangnam District, southern Seoul. Sales last year were down 70 to 80 percent.

“Before the pandemic hit, there were around 80 to 100 people in the Gangnam location during lunch hours,” he said. “Recently, there have only been 20 to 30 people.”

“I cannot borrow any more from the bank,” the man added. “I cannot even earn enough for rent.”

“The sales last year were around 100 million won ($89,400) lower than the year before, and the loss has been around 60 million won,” said the owner of a coffee chain in Gangdong District, eastern Seoul. “Individual cafes have been closing, but coffee chains cannot shut down their businesses easily, since the owners have invested millions of won.”

According to sources in the coffee chain business, last year’s sales of most coffee businesses were down by 20 to 40 percent compared to the previous year. Only Starbucks experienced growth last year, but the operating profit decreased.

Amid the declining overall sales, the volume of delivery orders has been increasing for local coffee chains. According to an analysis of Ediya Coffee’s sales data from October 2019 to September 2020, delivery orders rose 660 percent on year. Delivery sales of Angel-in-us Coffee grew 40 percent on year, and Twosome Place’s sales from deliveries in December, when the visitors were prohibited from dining indoors, grew threefold compared to six months earlier.

Coffee chains have been expanding their footprint using delivery apps as well. Twosome Place started using Baedal Minjok in November, and Holly’s Coffee began utilizing on Yogiyo in August. In 2018, Ediya became the first coffee chain to start accepting delivery orders through Baedal Minjok and Yogiyo. Ediya went on to sign a partnership deal with Coupang Eats, and has since been offering discount deals in an effort to sustain the delivery business. Among 3,300 Ediya stores, more than 2,000 have been offering delivery services.

Coffee shop businesses are competitively rolling out dessert and pastry items that can be paired with the beverages in delivery orders, which often require a minimum order. Starbucks has rolled out delivery-only items, including an avocado-themed meal box that contains avocado sandwich and salad. As of November, Angel-in-us had sold more than 1 million of its Vietnamese banh mi sandwiches since rolling them out in April.

Recently, Ediya published a pizza menu, and it’s being talked about on social media.

“Because of the pandemic, it has been hard for coffee chains to make ends meet just by selling coffee,” said a source in the coffee chain business. “The business owners have been overcoming the obstacles by running a diverse range of businesses.”