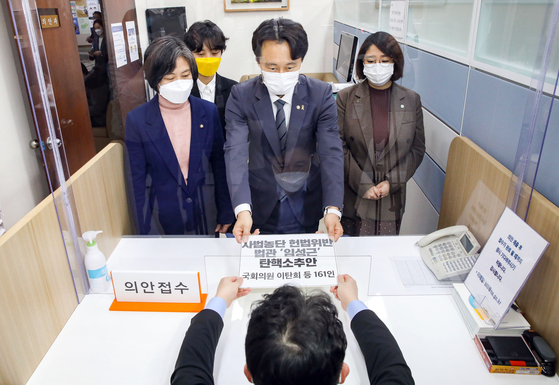 Rep. Lee Tah-ney of the ruling Democratic Party, center, submits a motion to impeach Lim Seong-geun, a senior judge on the Busan High Court who has been accused of abusing judiciary power by meddling in rulings, alongside lawmakers of the Justice Party, Open Democratic Party and the Basic Income Party Monday at the National Assembly in Yeouido, western Seoul. [OH JONG-TAEK]


A group of 161 lawmakers from the ruling Democratic Party (DP) and minor liberal parties motioned Monday to impeach Lim Seong-geun, a senior judge on the Busan High Court who has been accused of abuse of power by meddling in several rulings during the previous administration.

DP Rep. Lee Tah-ney filed the motion to impeach Lim, with the backing of lawmakers from the Justice Party, Open Democratic Party and the Basic Income Party and an independent representative, Kim Hong-gul, Monday afternoon.

The impeachment bill will be voted on Thursday.

Lim was indicted in March 2019 for abuse of power for meddling in several politically sensitive trials in 2015 and 2016.

Lim was accused of pressuring junior judges to specify in a 2015 ruling that a Japanese newspaper correspondent's claims about former President Park Geun-hye's actions for seven hours during the Sewol ferry tragedy in 2014 were groundless.

Tatsuya Kato, a former Seoul bureau chief for Japan’s Sankei Shimbun, was indicted in October 2014 for defamation after writing a column about former President Park and questioning her whereabouts for seven hours during the sinking of the Sewol ferry on April 16, 2014, which killed 304 people, mostly high school students. The reporter was acquitted in December 2015. Lim at the time served as a senior judge on the Seoul Central District Court and later served on the Seoul High Court.

He also allegedly intervened in a case involving two professional baseball players involved in illegal gambling overseas and meddled in the sentencing of progressive lawyers arrested for allegedly obstructing police during a SsangYong Motor demonstration in 2015.

The Seoul Central District Court acquitted Lim in February 2020 but acknowledged his meddling in trials was an “unconstitutional act.”

In a press conference with lawmakers from the three other parties, Rep. Lee questioned Lim's role in the cases he is accused of meddling in, saying that Lim “hid behind the judge in charge of the case and intervened in the trial process."

Once an impeachment motion is filed, the National Assembly speaker has to report it in the first parliamentary plenary session convened afterwards, and once tabled, the legislature has to vote upon it within 72 hours.

The National Assembly is set to vote on Lim’s impeachment Thursday. If it passes, it would mark the first such impeachment of a sitting judge in Korea's modern history. Voting is by secret ballot.

The impeachment would require at least 151 votes to pass. The DP has 174 lawmakers in the 300-seat National Assembly, which kicked off an extraordinary session Monday.

Lim’s term as a senior judge is set to expire in late February.

The main opposition People Power Party (PPP) accused the DP of threatening the independence of the judiciary.

Joo Ho-young, the PPP floor leader, went onto propose Monday the impeachment of Supreme Court Chief Justice Kim Myeong-su for infringing upon the "neutrality and independence of the judicial branch."

Choi In-ho, a spokesman for the DP, said in a statement, "The PPP is viewing the impeachment motion through the lens of political warfare and claims it undermines the independence of the judiciary. But the damage to the separation of powers principle and reckless intervention in the independent judiciary took place during the Park Geun-hye government, when the Saenuri Party was in power,” referring to the precursor of the conservative PPP.

He went onto to demand “proper repentance and an apology” from the party.

Two motions of impeachment against Supreme Court judges were proposed in 1985 and 2009 but neither passed the National Assembly.

Silence of the chief justice