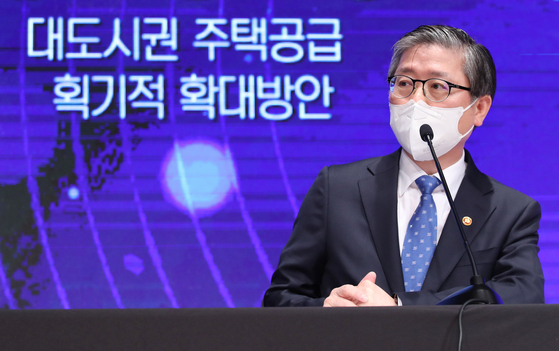 Land Minister Byeon Chang-heum on Thursday announces a bold plan to build 830,000 apartments in Seoul and other metropolitan cities to control the soaring real estate prices across the country. [JOINT PRESS CORPS]

KIM HYUN-YE
The author is a national team reporter at the JoongAng Ilbo.

A helicopter flew over a mountain village in North Gyeongsang. The person who got off the helicopter was the figure equivalent to today’s science and technology minister. The scene was as crowded as a festival.

The minister’s team headed to the Hwacheon 2-ri in Yeongyang County. The chopper came to the town after a copper mine was discovered. The county head welcomed the minister and gave a rosy briefing. The sudden discovery of a copper mine stirred the farmers.

In a few days, land prices went up by 10 times. Farmers aspiring to be sudden millionaires visited the county office to check the land registration map. The story made the news in January 1969.

Jason DeBolt quit his job on Jan. 8 and tweeted, “Today, I’m retiring from the corporate world at age 39.” He has been buying Tesla stock since 2013. On the day when Tesla’s stock price marked a record high, he posted a screenshot of his account totaling more than $11 million. He became one of the “Teslanairs” and took early retirement.

Everyone in different times and generations and of different genders dreams of becoming suddenly rich. The stories of people becoming rich overnight are still going on.

In the meantime, the people who suddenly become poor feel that such a success is only for lucky people. As of December 2020, the average price of apartments in Seoul rose to 1.43 billion won ($928,340), a 21.3-percent hike from the same period a year before. For a median income-earning household in Seoul to buy a house, they have to save up for 15 years and six months. Last year, the Kospi went up by 30.8 percent.

The hope of working hard and saving to buy a home collapsed amid the soaring prices. As people are afraid to be left out, they borrowed money to buy a home and invest. According to the Bank of Korea, the average debt of people under 39 was 70.2 million won as of the third quarter of 2020, 12 million won more than in 2017.

On Feb. 4, the government announced a plan to supply 830,000 apartments nationwide. It is the biggest project under the Moon Jae-in administration and twice the annual supply in the past.

The government says that housing price increases in the last four years did not result from a lack of supply, but the numbers say otherwise.