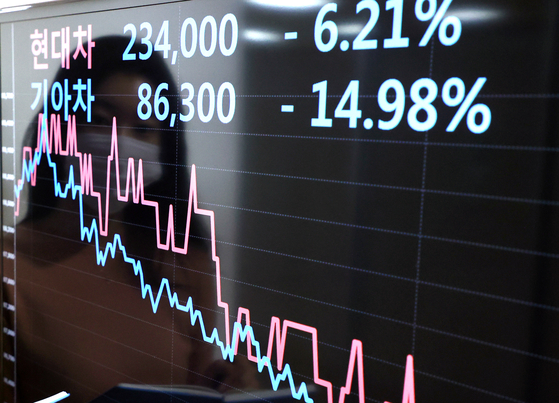 Prices of Hyundai Motor and Kia shares plunge on Monday as the Korean automakers said they are not in talks with Apple to co-develop autonomous vehicles. [YONHAP]

Hyundai Motor and four related companies, including Kia and Hyundai Mobis, lost 13.5 trillion won ($12 billion) of market capitalization on Monday as the Korean automaker said it is not in talks with Apple to collaborate on the Apple car.

Retail investors were hit hard by the news, as they had purchased on earlier rumors of a tie up, while some executives and the national pension dumped shares ahead of the revelation that no deal is in the works and foreigners were net sellers or tepid buyer.

Shares of Hyundai Mobis, which holds 21.4 percent of Hyundai Motor, closed 8.65 percent lower, and those of Hyundai Wia and Hyundai Glovis plunged by 11.9 percent and 9.5 percent respectively on Monday.

Combined market capitalization of five companies plunged by 9.7 percent, or 13.5 trillion, won in a single day.

Retail investors had been especially enthusiastic about unsourced reports of tie-up between Hyundai Motor and Apple to build an autonomous car.

Since the news broke on Jan. 8, they purchased a net 915.7 billion won of Hyundai Motor shares. The price of the shares rose as much as 21.1 percent. Foreign investors during the same period net purchased 37.5 billion won.

Analysts are calling for calm and rationalizing the devastating lack of news.

“Short-term price fluctuations of Hyundai Motor shares and other companies is inevitable, but in the long-term, their uptrend will continue,” said Cho Soo-hong, analyst at NH Investment & Securities.

“Even if the talk completely falls apart, the latest incident could act positively to Hyundai Motor Group as it means that its future mobility technology is top-notch among other global carmakers."

Some Hyundai Motor executives sold ahead of the drop.