Korea to spend $550 million on space this year

Korea to spend $550 million on space this year 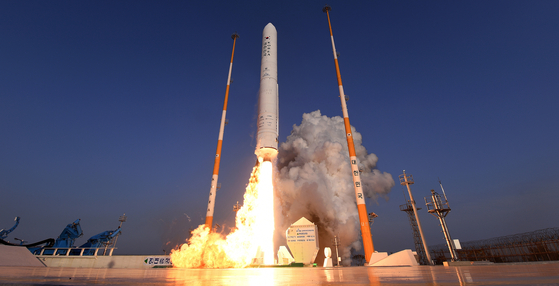 Of the budget, 189.7 billion won will go to the launch of the Korea Space Launch Vehicle (KSLV)-II, also known as Nuri, set for October, including completion of its launchpad at the Naro Space Center in Goheung, South Jeolla.

Boasting four 75-ton liquid engines in its first-stage booster, the three-stage rocket is meant to carry a 1.5-ton satellite into low orbit.

Its predecessor was the KSLV-I rocket, which carried the 100-kilogram (220 pounds) satellite into orbit on Jan. 30, 2013 after two failures and several delays.

Even though that was hailed as the first successful launch of a Korean-made space vehicle, the two-stage rocket borrowed from Russian technologies for its first-stage booster. The KSLV-II uses homegrown technologies entirely.

The development of multi-purpose satellites is another area of focus and the Science Ministry earmarked 322.6 billion won for developing and launching them this year through 2022.

One mid-sized satellite will be launched on Russia’s Soyuz spacecraft launcher in March from Kazakhstan. It will be used to monitor urban areas and topographical features and design maps.

The government will take its first major step toward moon exploration with 52.6 billion won set aside for developing Korea’s first lunar orbiter.

The orbiter, due to land on the Moon in 2022, will be supported by a launcher made by Soyuz and send visual information about the Moon.

In the longer term, the ministry vowed to come up with a roadmap to reduce space debris, although specific plans were not stated.