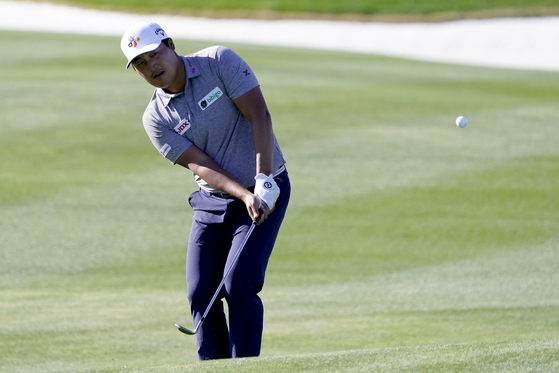 Lee Kyoung-hoon chips up to the green on the 17th hole during the final round of a PGA golf tournament on Sunday in Scottsdale, Arizona. [AP/YONHAP]

Lee finished tied for second place after shooting a three-under-68 on the final round to finish the tournament with an 18-under-266, one behind winner Brooks Koepka. This is a career-best runner-up finish in Lee's 70th Tour start.

Starting the day trailing the co-leaders by three, Lee hung in there all day and briefly tied for the lead with a birdie on the 15th hole.

However, all hopes of his first PGA Tour victory were dampened when Koepka chipped in for an eagle from 97 feet on the penultimate hole and won by one shot over Lee and Xander Schauffele.

Lee, who has won twice on the Japan Tour and twice on the OneAsia Tour, had a 33-foot birdie attempt on the 18th hole to force a playoff, but missed the target.

"I was a little nervous, and hopefully next time when I’m in the situation, I will take the chance and win,” Lee said.