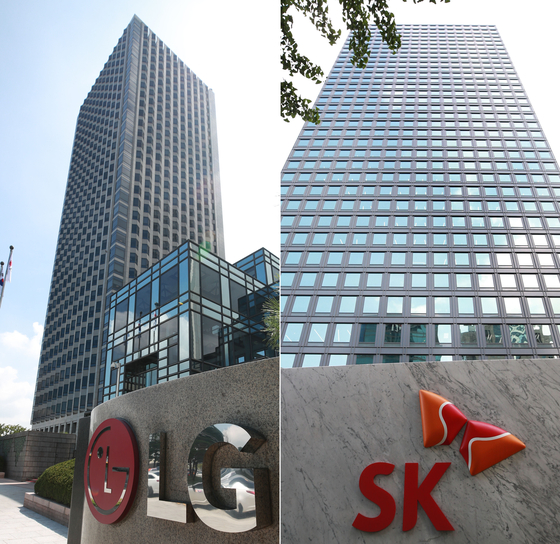 The U.S. International Trade Commission on Wednesday sided with LG Energy Solution, banning SK Innovation from importing lithium-ion batteries and components to the U.S. for the next 10 years. [YONHAP]


Electric vehicle (EV) makers are asking two Korean battery companies to get beyond their differences so that a brutal battle between them over intellectual property doesn’t slow the development and growth of the EV market.

The U.S. International Trade Commission (ITC) on Wednesday sided with LG Energy Solution in a dispute in which SK Innovation was accused of stealing trade secrets related to EV battery technology. It prohibited SK Innovation from importing lithium-ion batteries and related components to the United States for 10 years.

While grace periods were granted for SK Innovation’s U.S. clients — Volkswagen and Ford — so they will be able find other battery suppliers, the companies could have trouble securing enough supply for their scheduled models. The commission granted a two-year grace period for Volkswagen’s EV lines and four years for Ford’s planned electric F-150 truck in the United States.

On Friday, Volkswagen called itself an “unintended victim” and asked the U.S. government to extend the reprieve to at least four years, according to Reuters.

“Ultimately, however, it is our hope the two suppliers will settle this dispute outside of the courtroom,” Volkswagen was quoted as saying.

Ford on Thursday called for a swift settlement between the two battery makers.

“A voluntary settlement between these two suppliers is ultimately in the best interest of U.S. manufacturers and workers,” Jim Farley, CEO of Ford Motors, wrote on Twitter Thursday.

Some 200,000 Volkswagen EVs scheduled for production in 2022 at its auto factory in Chattanooga, Tennessee were to be fitted with batteries from SK Innovation's Georgia plant. After the first year of production, Volkswagen will have to use the products of other makers if the ITC ruling holds.

Ford’s F-150 electric truck, which will be made at its Michigan plant, is scheduled to hit the market in 2022 with SK batteries.

Automotive companies are not the only ones hit by the latest ITC ruling.

Georgia, which was promised $2.6 billion of investment by SK Innovation in the building of two EV battery factories and 2,600 local hires, is also concerned.

“President Biden and his administration also have the opportunity to support thousands of hardworking Georgians — and their communities — who would benefit from SK Innovation’s continued success in our state.”

The ITC ruling on Wednesday can be overturned if the U.S. president vetoes the commission’s decision within 60 days.

If the two companies come to a settlement within the 60 days, it could also free SK Innovation from the ITC ruling.

The two companies haven’t been able to come to agreement in terms of a settlement. While they are not confirming the exact amount, local press reports suggest LG Energy Solution has been calling for 2.5 trillion won ($2.27 billion) to 3 trillion won in compensation while SK Innovation has been proposing a maximum of 600 billion won.

“The amounts [offered by the two companies] have to be on a similar level in order for additional negotiations to take place, such as how SK will pay them, for instance, if it should be a one-off payment or should be paid as a royalty,” said Jang Seung-se, an executive vice president at LG Energy Solution during a conference call Wednesday.

“Since the ITC ruling has been finalized, matching the amount would have to come first.”

SK Innovation said it is willing to participate in the settlement under “rational conditions” in a statement Wednesday.

It said it regrets the ITC’s ruling but said it will try to more actively participate in the remaining process, including the presidential review to correct the latest ITC decision.