Unlike the lithium-ion batteries currently used in electric vehicles (EVs), lithium-sulfur batteries are a relatively new technology considered one of the contenders for the all-important next-generation battery — a smaller, lighter, more powerful battery considered crucial for the long-term growth of the EV market.

Lithium-sulfur batteries use sulfur in the battery’s cathode, instead of the magnesium, cobalt and nickel composition found in lithium-ion batteries. Replacing the cathode material with sulfur allows for a lighter weight, higher energy density per weight and lower cost, LG said.


The test flight was the first attempt in Korea to use a rechargeable energy source other than lithium-ion batteries to fly an unmanned air vehicle.

The vehicle used was the EAV-3 developed by the Korea Aerospace Research Institute (KARI). Measuring 9 meters (29 feet) in length with a 20-meter wing span, it weighs 21 kilograms (46 pounds), excluding the battery.

Made to work on eco-friendly energy sources, the EAV-3 is normally powered by lithium-ion and solar batteries. In LG’s test flight on Aug. 30, the EAV-3 flew for 13 hours. During the day, it rose to as high as 22 kilometers (14 miles) above the ground, setting a domestic record for unmanned air vehicles, according to LG. 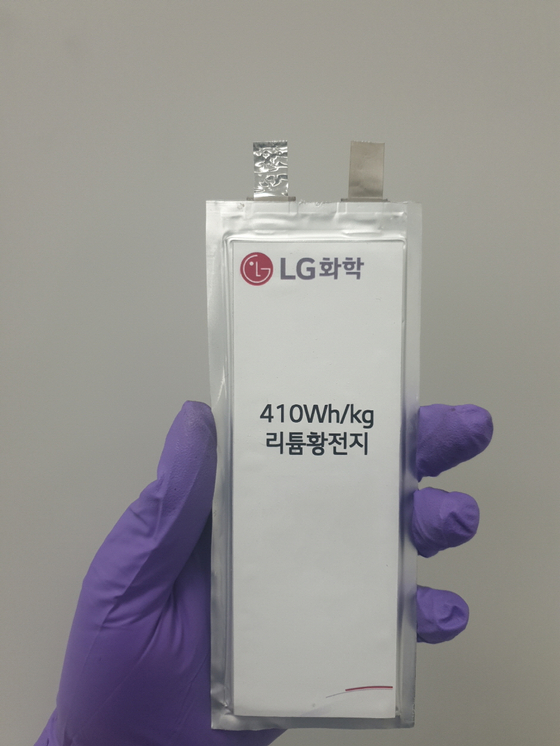 For seven hours of the flight, the EAV-3 flew in the stratosphere, between 12 and 22 kilometers above the ground. This layer of the atmosphere is more frequently used by large-sized passenger airplanes and isn’t normally accessible to small-sized aircrafts like the EAV-3.

The performance was the result of an 18-month testing period in which LG Chem’s research team had to recreate stratospheric environmental conditions to find the best way to increase the lithium-sulfur battery’s performance in the air.

“The test results are meaningful in that it proved our lithium-sulfur battery can function stably in the stratosphere, an extreme environment where the temperature goes down to minus 70 degrees Celsius [minus 158 degrees Fahrenheit] and the air pressure is only four percent of the earth’s surface,” LG Chem said in a statement.

The battery maker added that the next experiment would be flying the aircraft with the lithium-sulfur battery for days, instead of hours. As for the next-generation battery’s commercialization, LG said it plans to start mass production in 2025.

Nuri success heralds the dawn of space business in Korea