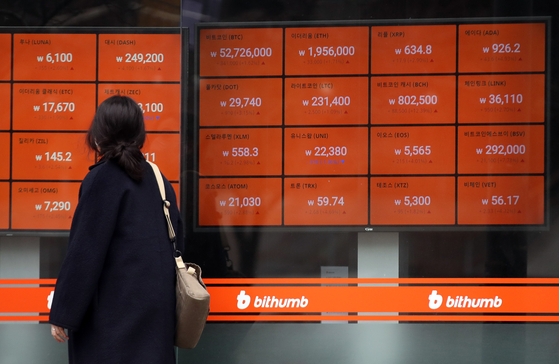 A passerby looks at cryptocurrency prices displayed through a screen operated by local crytocurrency exchange Bithumb in Gangnam, southern Seoul, on Monday. [YONHAP]

The price of bitcoin rose to an all-time high of $49,716 on Sunday as possibilities grow for the cryptocurrency to be accepted by major global companies like Tesla.

The price of bitcoin has been rising rapidly, especially after Tesla announced it invested $1.5 billion in the cryptocurrency on Feb. 8.

The continued rise was largely due to big name companies mentioning how they will embrace the cryptocurrency in their businesses after Tesla announced its investment and plans to accept bitcoin as payment when customers buy its cars in the future.

Mastercard announced on Feb. 10 in its news release that it is bringing cryptocurrency onto its network.

"Whatever your opinions on cryptocurrencies [...] the fact remains that these digital assets are becoming a more important part of the payments world," the card company said in a statement. "We are preparing right now for the future of crypto and payments, announcing that this year Mastercard will start supporting select cryptocurrencies directly on our network."

BNY Mellon announced on Feb. 11 that it will be the first global bank to offer integrated services for digital assets later this year.

Canada's financial regulator on Feb. 11 approved the first publicly traded bitcoin exchange traded fund (ETF) in North America. The ETF will seek to replicate the performance of the price of bitcoin.

"The most notable event during holidays was that a number of parties, including the Canadian government and BNY Mellon, have implied through their decisions that multiple parties in the market recognize cryptocurrency as an alternative to cash or as a means to allocate assets," said Han Ji-young, a research fellow at Cape Investment & Securities, in a report Monday. "Their decisions are based on the expectation that there will be abundant liquidity for a while."

Lim Dong-min, a research fellow of Kyobo Securities said in his report last week that the recent rise in bitcoin prices after Tesla's investment is largely due to expectations that bitcoin will soon be accepted as a means of payment.

Already, the cryptocurrency’s price rose by roughly 60 percent compared to the end of last year. Such a fast rise could mean a quick plunge later.