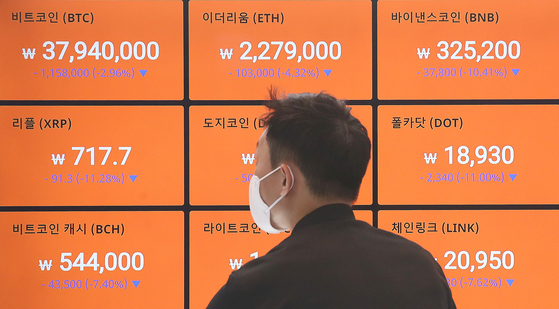 Cryptocurrency prices are displayed on a digital screen at Bithumb’s office in Gangnam, southern Seoul, on Tuesday. Cryptocurrency exchanges are rushing to drop the number of altcoins — minor coins alternatives to bitcoin — they offer in a bid to appeal to banks as they have to find partner banks that can issue real-name accounts to their virtual asset customers by Sept. 24. [NEWS1]

Big cryptocurrency exchanges continue to cut the number of altcoins they offer as they seek banking relationships.

Altcoins are alternatives to established coins.

On June 18, Upbit, the country’s largest exchange by trading volume, announced the delisting of 24 altcoins, including Lambda, Pixel and Pica. The virtual assets will be removed on June 28 at 12 p.m. The exchange delisted five coins earlier this month.

Bithumb delisted four altcoins, including Aurora and DragonVein, on June 17.

Two days earlier, Coinbit, the third largest exchange in Korea, announced the delisting of eight altcoins and put 28 coins on its investment warning list, a first step before delisting the coins from the exchange. On Coinbit, a total of 36 coins, half the cryptocurrencies available for trading, have either been delisted or put on the warning list.

The moves come as the exchanges hope to establish partnerships with banks that offer bank accounts in the name of the actual trader for trading on the exchanges. An amendment to the Act on Reporting and Using Specified Financial Transaction Information requires all businesses dealing with the exchange, storage and management of virtual assets to report their business to the Korea Financial Intelligence Unit (KoFIU). The amendment, in effect from March 25, gives a six-month grace period to exchanges.

To report to the KoFIU, local exchanges must find banks that are willing to issue accounts for their virtual asset customers under the name of the customers. Exchanges that fail to do so will eventually have to shut, as investors using non-KoFIU registered exchanges are prohibited from engaging in transactions with financial companies and banks. 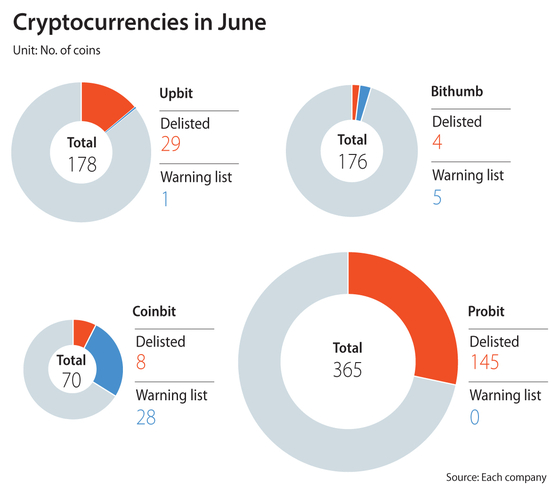 But the big names are struggling to extend the contract with the banks as they have been reluctant to offer so-called real-name accounts for cryptocurrency trading as they don’t want to be responsible for potential money laundering and crypto-asset related fraud. The more coins the exchange have listed, the more difficult risk evaluations.

Exchanges are abandoning lesser-known, underperforming coins to appeal to the banks and financial regulators.

Probit on June 1 delisted a total of 145 coins. Some 365 new coins were listed on Probit in May alone.

On online communities, Korean retail investors are expressing their anger toward the announcement, wondering how they could change their outlook on recently list coins.

Endor, a cryptocurrency that Upbit decided to delist, was trading at 7.08 won per coin as of 3 p.m. on Tuesday, down 87 percent compared to June 10.

This resulted in more than 100 altcoins being traded on Korea’s major crypto exchanges. Coinbase, a U.S.-based exchange, only trades about 50 virtual coins. In the United States, federal authorities, such as the Commodity Futures Trading Commission and the Securities and Exchange Commission, regulate virtual assets.

Local exchanges say the coins they decided to delist "fell short of internal guidelines" and that delisting is an attempt to protect retail investors.

This is an about face. When there was a boom of cryptocurrencies, local exchanges were scrambling to list as many coins as possible to attract more retail investors. More coins trading on the exchanges means they can earn more from commissions.

But more coins will likely to be delisted as time is ticking and exchanges only have until Sept. 24 to find partner banks.

Experts say unconditional delisting of coins is not the right way to protect individual investors.

“Clear guidelines about the process of listing and delisting is the most important factor,” said Kim Hyoung-joong, a professor at Korea University’s School of Cybersecurity.

“Managing faulty coins is a necessary measure in order to make the market fair and healthy, but the issue here is the speed,” said Park. "For the soft landing of the cryptocurrency market, the government must offer exchanges a grace period and come up with clearer guidelines."

The Financial Services Commission may revise the related law to prevent exchanges from directly listing coins themselves. The financial authority said it will announce the revision as soon as possible before Sept. 24.