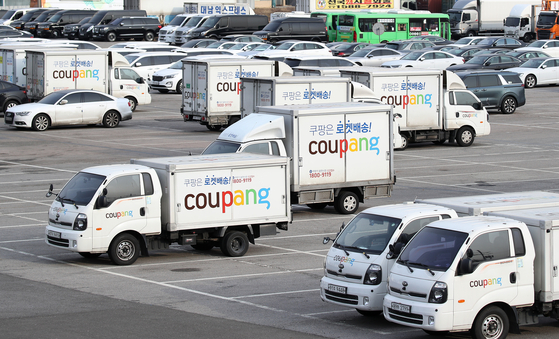 Coupang delivery trucks parked in a lot in Seocho District, southern Seoul, on Tuesday. The company disclosed on Tuesday its plans for distributing to a group of employees shares worth around 2 million won per person. [YONHAP]


Coupang’s plans for an IPO on the New York Stock Exchange has stirred up the local startup industry, and local entrepreneurs and experts say Korea still has a long way to go in order for unicorns to thrive.

The Ministry of SMEs and Startups last October identified 20 Korean unicorn companies with valuations of over $1 billion that have not gone public yet. The first company in the list was Coupang. According to the ministry, Coupang broke the 1-trillion-won ($910 million) mark in May 2014.

Coupang, an e-commerce operator that delivers goods and food to homes and businesses, is planning to list on the New York Stock Exchange (NYSE) in a $1-billion offering. When the plans were made public, the government announced that it will expand support for startups.

“Coupang’s push for an IPO is a major accomplishment as a Korean unicorn,” said Hong Nam-ki, deputy prime minister for economic affairs and finance minister, in a Facebook post. “We will make an all-out effort to strengthen the venture and entrepreneurship ecosystem.” 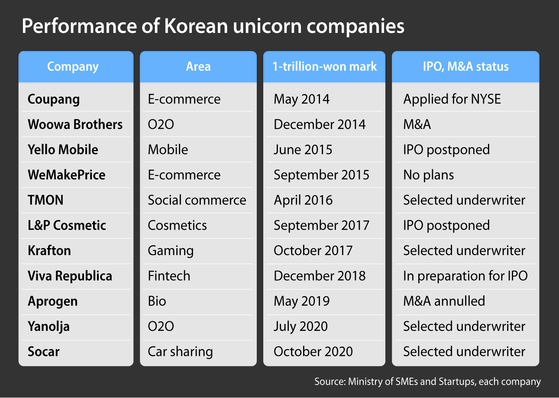 Industry sources say that the current climate for entrepreneurship in Korea makes it hard for a second Coupang to be born. With the Tada controversy as an example, sources say that the government’s measures are excessive. Ride-sharing service Tada gained over 1 million members in less than a year since its launch. Tada’s growth was met with resistance from the taxi industry, which led to the National Assembly’s passage of a bill aimed at banning Tada in March. Since then, Tada’s services have been halted.

“When there is no longer any future, no one makes new investments,” said Lee Jae-woong, former CEO of Socar.

“In Korea, mobility, fintech and healthcare are the only fields where a ‘second Coupang’ can emerge,” said Moon Hyung-nam, a professor at Sookmyung Business School. “However, the strict regulations make it hard for unicorns to arise, and even if they do, they grow slowly.”

“Coupang’s core service, Rocket Delivery, was caught up in a controversy in terms of its legality, but was officially legalized when the restrictions surrounding small cargo trucks were alleviated,” said Koo Ja-hyun, a research fellow at the Korea Development Institute. “The government needs to create a regulatory environment that is conducive to innovation.”

According to the ministry, seven unicorns were successful in earning back their investments by selling the companies or going public as of October. Woowa Brothers was sold to Delivery Hero. Cosmetics company Itshanbul and game development company Doubleugames listed on the Kospi, and Pearl Abyss and Kakao Games on Kosdaq. TMON, Krafton, Yanolja and Socar, which were on the list of unicorns, are preparing to list on Kospi this year. Yello Mobile and L&P Cosmetic, however, have halted their preparations.

L&M Cosmetic, which became known for its face masks advertised by BTS, went into deficit in 2019. Online shopping platform WeMakePrice last year recorded an operating loss of 54 billion won. Compared to 2019, the company’s operating loss decreased by around 30 percent, but the deficit is considered sizable in the industry. Last year, WeMakePrice’s sales recorded 386.4 billion won, which is 17 percent lower than its performance in 2019.

“We currently don’t have plans regarding IPO,” said a spokesperson for WeMakePrice.

Some voices call for an improvement in the investment conditions and awareness surrounding it.

“Local venture capital firms are low on funds, and they usually invest short-term. Most of the big investments come from overseas venture capital,” said an industry source who wanted to remain anonymous. “Local major firms cannot even dream of acquiring startups because there is a negative perception that they will invade brick-and-mortar businesses.”

“The public sector is centered around diversifying its portfolio, so there is a limit in investing in budding companies with potential,” said Lee Ki-dae, the chief operating officer of Startup Alliance.

There are companies caused their own demise due to the lack of entrepreneurial spirit. Yello Mobile carried out its merger and acquisition (M&A) process by swapping shares with promising startups. The company was evaluated at 4 trillion won, but it was embroiled in a multitude of trials due to excessive investment. Auditors have not signed off on the accounts since 2017.