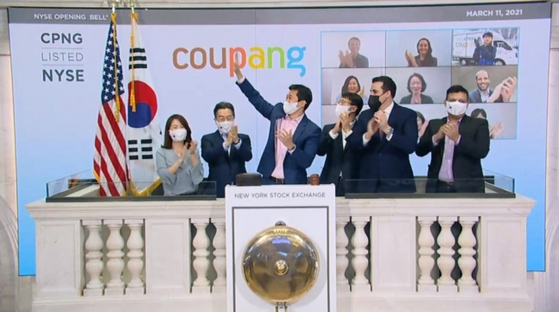 
Coupang stock rose 41 percent in its stock market debut on the New York Stock Exchange, giving it a market cap of more than $80 billion.


The SoftBank-backed e-commerce operator’s stock opened at $63.50, almost double the initial public offering price of $35. The price went as high as $69 during trading, but closed at $49.25 on Thursday, up 40.7 percent.

The IPO raised $4.6 billion and put Coupang's market cap at around $88 billion.


The company was last valued at $9 billion in a 2018 funding round, according to PitchBook, a market data provider.

Coupang, founded by Chief Executive Officer Kim Bom-suk in 2010, is the second largest e-commerce player in Korea after Naver, which operates Naver Shopping. But the Delaware-incorporated company has grown rapidly over the past years through its aggressive investment in technology and distribution facilities, which are key to fast delivery.

“We’ve really tried to go to those extremes that have a really high bar to not make something incrementally different, but think about how we can just change the actual frame of it — the framework,” said Kim in an interview on Thursday, according to a report from The New York Times.

The company’s name is a mix of the English word “coupon” and “pang,” the Korean sound for hitting the jackpot.