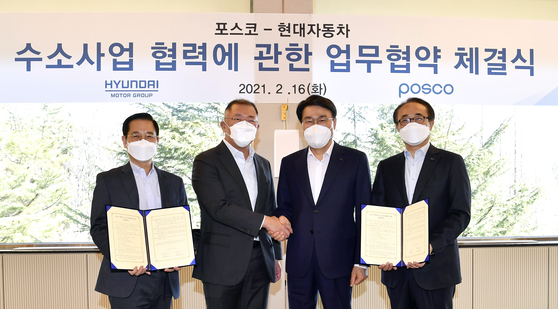 
Hyundai Motor Group and Posco will work together on expanding hydrogen business opportunities in and outside of Korea.

Steelmaker Posco will produce hydrogen, which is generated as a byproduct in making steel, and develop related technology while Hyundai Motor will use the green energy to charge its fuel cell electric vehicles.

The two companies signed a memorandum of understanding (MOU) Tuesday for the partnership.

Under the MOU, Hyundai Motor Group will replace some 1,500 heavy duty trucks at Posco’s steel mills located in Pohang and Gwangyang with its hydrogen-powered Xcient Fuel Cell truck.

The two companies will also cooperate on constructing hydrogen charging infrastructure inside the steel mills which will use byproduct hydrogen from the mills. Developing new material more suitable for fuel-cell electric vehicles will also be done through the partnership.

In fact, Hyundai Motor's Nexo SUV, which is powered by hydrogen, has been using new metal bipolar plate developed by Posco.

“Posco has the capacity to generate some 7,000 tons of hydrogen as a byproduct,” said Choi Jeong-woo, chairman of Posco Tuesday. "Posco will produce hydrogen while Hyundai Motor Group utilizes the energy source under the latest partnership.”

Posco since Dec. 2020 has been pushing the hydrogen economy, setting a goal of producing some 5 million tons of hydrogen by 2050. It also pledged to raise 30 trillion won ($27.2 billion) in revenue from its hydrogen business during the cited period.

Under the initiative, Posco is developing technology that produces, stores and transports hydrogen in a more efficient method, utilizing ammonia.

Steel-making affiliate Hyundai Steel is also contributing to the initiative. Last year, Hyundai Steel participated in a state-run project to establish a hydrogen supply center near its Dangjin steel mill that is able to supply 2,000 tons of hydrogen, powering some 13,000 cars annually when completed within this year.

“A paradigm shift to the hydrogen economy is a challenge faced by all corporations in their respective fields” said Hyundai Motor Group Chairman Euisun Chung on Tuesday.

“With the latest partnership with Posco, we will generate substantial achievements in building the hydrogen economy.”