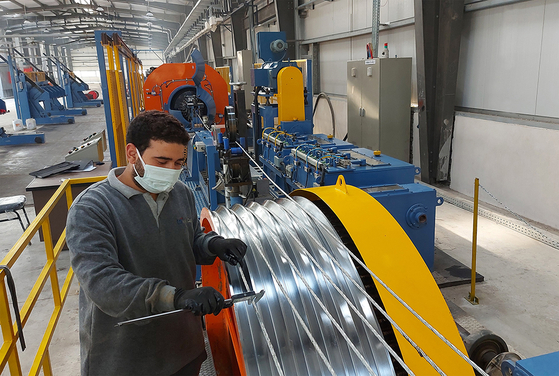 “LS Group will further stabilize its overseas business while improving our competitive edge in the global market,” said Christopher Koo, the chairman of LS, during a New Year’s address.

In line with Koo’s agenda, LS affiliates are successfully expanding their presence in the global market.

For LS Cable & System (LS C&S), overseas investment has been one of the key strategies for international expansion.

LS C&S increased its investment in the United States, Poland, Vietnam, Myanmar and India, focusing on electric vehicle parts and new renewable energy businesses. As a result, LS C&S has landed large contracts worth more than a trillion won ($910 million) in Taiwan, the United States, the Netherlands and Bahrain.

LS C&S’s solar energy business is thriving not only in Korea but also overseas. The company has provided electric cables for more than 30 solar power stations in Korea.

At the same time, LS-VINA, the Vietnamese production corporation of LS C&S, is expected to remain at the very top of the cable industry in Vietnam.

Meanwhile, LS Electric announced its “Drive Change for 2030” plan for the next ten years. The company is innovating its strategy with the goal of maintaining an annual growth rate of 10 percent and expanding its global operations to take up more than 70 percent of its business portfolio.

LS Electric’s business performance has remained stable, as the company has recorded some 134 billion won in the total accumulative amount of contracts related to a Thai railroading project since 2001.

LS-Nikko Copper, the second biggest smelter in the world, is innovating its manufacturing process by constructing a smart factory.

LS Mtron has developed a tractor equipped with an eco-friendly engine, while E1, specialized in eco-friendly LPG, is strengthening its foothold in the international market by expanding its global network.

“LS is at the forefront of the paradigm shift in power infrastructure, smart energy and digital transition businesses,” said an official from LS. “Expanding our global market presence in the green high-tech industry, we will continue to contribute to the economic growth of Korea.”