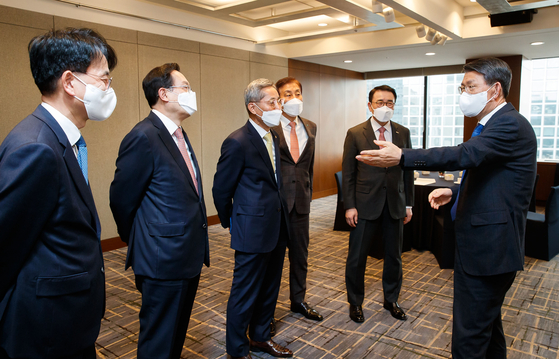 
Banks have agreed to the government proposal to extend the suspension of loans and interest payments for small and mid-size companies and small corner shops for another six months.

According to the FSC, the heads of the banking groups have agreed to extend the suspension of principal and interest payments considering the current ongoing Covid-19 situation as well as the impact the pandemic has had on the real economy.

While noting that the banks are currently closely managing the suspended loans, including adding loan-loss provisions and monitoring the borrowers, the banking group chairmen requested a “soft landing” exit plan.

“We have to work persistently on [financial] support efforts until the Covid-19 is fully overcome,” FSC Chairman Eun said during the meeting on Tuesday. “We plan on normalizing financial actions taken related to the crisis in an orderly fashion.”

The suspension was supposed to be lifted at the end of March. The government with the cooperation of the lenders suspended loan and interest payments for SMEs and small shops since February last year when the Covid-19 cases started to surge.

The program was once extended for six months when initially it was supposed to be lifted at the end of September last year.

An estimated at 125 trillion won ($112 billion) of loans have been suspended.

The meeting also discussed the cooperation of the banking groups in relation to government-led funds that will be investing in the Moon Jae-in government’s ambitious New Deal projects.

FSC head says SMEs will be cut slack on loans

Interest deferment and other measures may be extended