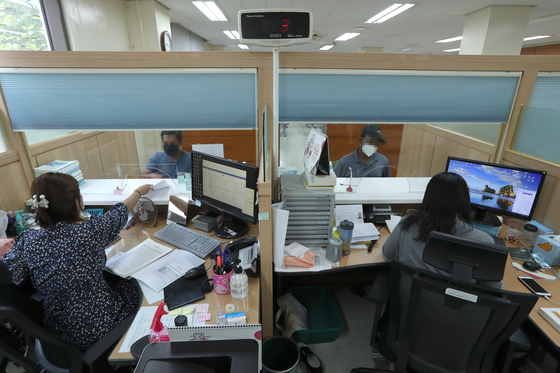 An immigration office in Seoul takes in applications from asylum seekers in Korea on June 10, 2020. [KIM SUNG-RYONG]

Two men were arrested for helping some 80 economic migrants from Pakistan pretend to be asylum seekers in Korea.

A special investigations team from the Busan Immigration Office told local media outlet Seoul Shinmun Wednesday that a Pakistani man in his 40s, and a Korean man were arrested for helping some 80 Pakistanis pretend to be asylum seekers and find jobs in Korea.

According to local reports, the Pakistani is a 46-year-old who has been living in Korea for nearly 20 years and is fluent in Korean.

The Korean suspect owns a gosiwon, or cheap lodging houses, in Korea, which was used to give false residential documents to some 80 Pakistanis. Proof of residence in the country is one requirement to file for asylum in Korea.

Prosecutors are investigating the two men for violation of the Immigration Act.

Korean laws define refugees as people fleeing persecution in their home countries for reasons of race, religion, nationality, political affiliation or membership in a particular group. Economic migrants are not included.

Korea’s refugee act allows asylum seekers to stay in the country as long as their application for asylum is being processed, which can take two to three years counting up to two reviews by the Ministry of Justice and up to three trials by an administrative court.

Six months after submitting an application, asylum seekers gain the right to work near their temporary residences in Korea.

“They take advantage of the fact that it can take up to three years for the legal procedures to end, during which time the asylum seekers can stay in Korea and make money,” an official of the investigations team at the Busan Immigration Office told the JoongAng Ilbo on Wednesday.

According to the office, the Pakistani received around 1 million won ($902) per fake asylum seeker for his brokering service.

The office said it tracked down eight Pakistanis among the 80 he helped as of Wednesday. Of the eight, two have been arrested and six deported, according to the office.