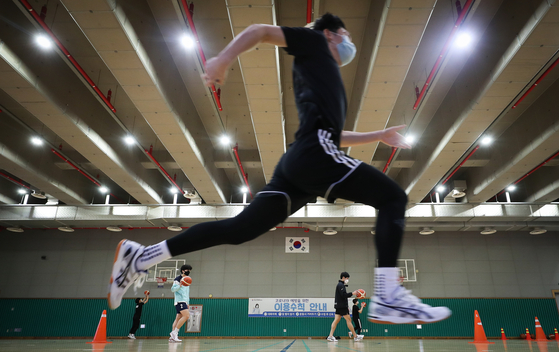 Students practice for college admissions for sports majors at a gym in Yangcheon District, western Seoul, on Dec. 24, 2020. [YONHAP]


Young athletes in schools will be temporarily suspended from training and competitions if they are caught bullying at school, a new law by the Seoul Metropolitan Office of Education states.

“Due to the recent bullying scandals surrounding professional athletes, we have decided to introduce a law to ban students from participating in sports competitions and training if the student is has been caught bullying at school,” the office said in its statement Thursday.

Any middle or high school student who has been transferred to another school for bullying another student will be banned from applying to universities using a special admissions track based on the student’s athletic achievements.

The new law will be introduced shortly after the office holds a public hearing with parents and student athletes, the office said.

A number of Korea’s star athletes have been embroiled in bullying scandals lately. Lee Jae-young and Lee Da-young, twin volleyball players of the Heungkuk Life Insurance Pink Spiders, were accused last week of bullying their middle school teammates. Since then, the two have been indefinitely suspended from the national volleyball team and club matches and banned from becoming coaches after they retire.

Another two popular volleyball athletes, Song Myung-geun and Shim Kyoung-sub of OK Financial Group OKman Volleyball Club, have also been recently accused of bullying in school. Both have withdrawn from the remaining games of this season.

Young athletes are often trained together in training camps in Korea. Many victims of alleged bullying said they were bullied by fellow students at these camps.

“In order to better regulate these facilities, the schools that run these camps ought to provide a monthly counseling service to the students,” Seoul Metropolitan Office of Education said in its statement. “When it is found that a student is bullied at the facility, the bullying student must be immediately expelled from the facility.”

Following the enactment of an amendment to the School Sports Promotion Act in May, the office said CCTV cameras will be installed at the facilities in order to regulate students’ behaviors.

“We will no longer tolerate bullying among student athletes,” said Cho Hee-yeon, superintendent of Seoul Metropolitan Office of Education. “With the new regulations, we hope to create an environment where students’ rights are better protected.”