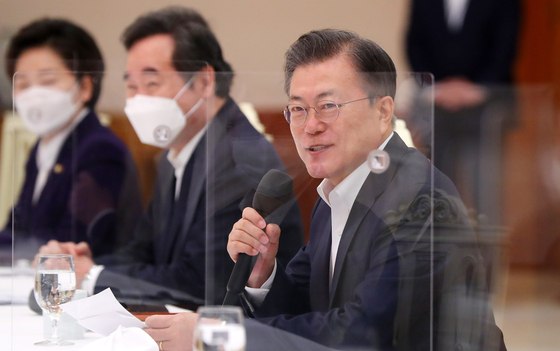 President Moon Jae-in, right, gives an opening remark during the luncheon meeting at the Blue House with the leadership members of the ruling Democratic Party on Friday. [YONHAP]


President Moon Jae-in floated the idea on Friday of handing out another government payout to boost morale after the Covid-19 crisis subsides.

"When the country is in a situation to escape from Covid-19, we can consider paying consolation money to boost the morale of the people," Moon was quoted as saying by Presidential Spokesman Kang Min-seok. Moon made the remarks during his meeting with the ruling Democratic Party (DP) leaders.

The president was responding to the request of DP Chairman Lee Nak-yon and floor leader Kim Tae-nyeon that another round of cash payouts be given to the people following the economic fallout caused by the pandemic.

The government and ruling party are currently working on a plan to start a fourth round of relief payouts next month. About 20 trillion won ($18 billion) will be paid to mostly small business owners suffering from the pandemic.

The consolation money Moon proposed Friday would be given to everyone, similar to the government's first round of relief funds paid in May 2020. At the time, Moon originally announced a plan to provide government relief to 70 percent of the country's households. On the eve of the April 2020 general elections, the DP pressured the government to pay emergency relief funds to all families. In May, the government spent more than 14 trillion won on relief money for all households.

The second and third rounds, however, were given only to selected populations who suffered particularly serious losses due to the pandemic.

The luncheon meeting on Friday was the first time for Moon to invite the entire DP leadership to the Blue House since the party elected the leaders last August.

According to Kang, no discussion took place between Moon and DP politicians about the latest controversy surrounding a top presidential aide's wish to leave the Blue House due to his frustration over the way the administration is pushing forward the prosecutorial reform.

Shin Hyun-soo, senior presidential secretary for civil affairs, recently told Moon he wanted to step down, after the new minister of justice ignored him during a recent reshuffle of prosecution leaders. Although Moon tried to persuade Shin to stay, he insisted on leaving the Blue House, presidential sources said.

Moon made no public comment about the incident. Justice Minister Park Beom-kye said he wants to sit down with Shin to resolve the issue.

Shin took a two-day leave on Thursday, and sources close to him told the JoongAng Ilbo he has no intention of going back to the Blue House.