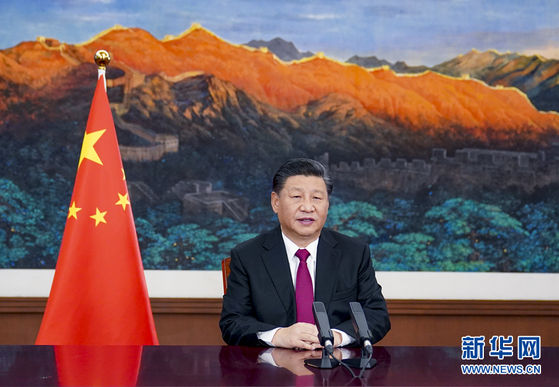 As China focuses on the independence of its domestic economy, reducing imports and developing local suppliers, Korean companies need to prepare for impact by maintaining technological leadership in advanced industrial materials, a report from the Bank of Korea said Sunday.

China unveiled a so-called dual circulation strategy last year intended at reducing its dependence on overseas markets and technology in the long term. A trade row with the United States has pushed the country to brace for self-sufficiency.

Rather than acting as the world’s factory – importing middle goods and exporting assembled final goods – the country hopes to build leadership in advanced industrial materials and high-tech products, such as semiconductors.

In the short term, China’s shift to the local economy could be a good news.

According to a recent forecast by Goldman Sachs, the Chinese economy will account for 25 to 35 percent of world’s economic growth from 2021 through 2024 as its economy quickly recovers.

The economic recovery will likely lead to an increase in exports of Korean companies to China for now.

The central bank’s report said this year, there will be big import demand for advanced industrial materials in China as the country invests in the development of manufacturing facilities.

From Korea to China, exports of high-end consumer goods, especially cosmetics and beauty-related goods, as well as semiconductors will likely increase, the report said.

However, in the mid to long term, China’s dual circulation strategy could hurt Korea’s exports to China as the country increasingly supplies consumer goods and middle goods from within.

For semiconductors, for instance, the country’s self-sufficiency rate is still very low despite Chinese government’s efforts. According to data from market researcher IC Insight, China self-supplied 15.7 percent of semiconductors it used in 2019.

However, with it being the world’s largest market for chips and second-largest investor in semiconductor research and related technologies, according to the bank’s report, China could ramp up the self-sufficiency rate in the future.

Morgan Stanley, in report last year, said China will likely reach self-sufficiency rate of 40 percent in chips by 2025 if there are no additional trade restrictions from the United States. China’s original goal was to achieve 70 percent by 2025.