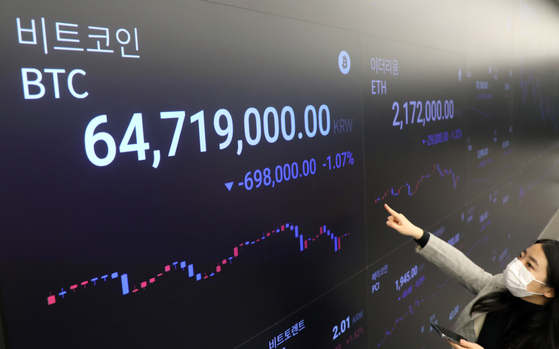 
Mr. Cho, 39, recently sold off two-thirds of his 90-million-won ($81,300) stock investment, based on an analysis that the Kospi has reached its peak. Then he sunk 51 million won in bitcoin.

“I hesitated at first but jumped into bitcoin investment as the price of bitcoin has been soaring constantly,” Cho said. “I heard from a friend that he earned tens of millions of won through it.”

Some Korean retail investors are getting bearish on stocks and going gaga for bitcoin.

According to Korea Exchange, operator of the local stock market, retail investors net purchased 25.9 trillion won worth of shares in January. But in February, they net bought only 5.8 trillion won as of the 19th of the month.

The amount of deposits in investors' trading accounts decreased to 66.9 trillion won as of Feb. 18 compared to 74.5 trillion on Jan. 12, according to Korea Financial Investment Association, an 11.2 percent decline. Brokers don't deal in cryptocurrency.

“As the Kospi went under a strong adjustment, retail investors’ buying spree slowed down,” said Suh Sang-yong, an analyst at Kiwoom Securities.

Experts say retail investors have been putting their money into bitcoin instead.

According to NH Nonghyup Bank, Shinhan Bank and K bank, roughly 1.4 million new bank accounts were opened last month, up 30 percent compared to the same period a year ago. Since early 2018, anyone who wants to invest in bitcoin must have an account in a commercial bank. The government required cryptocurrency exchanges to partner with banks that would issue accounts on its behalf.

The number of customers of Bithumb, one of the country's largest cryptocurrency exchanges, skyrocketed 760 percent last month compared to a year earlier. 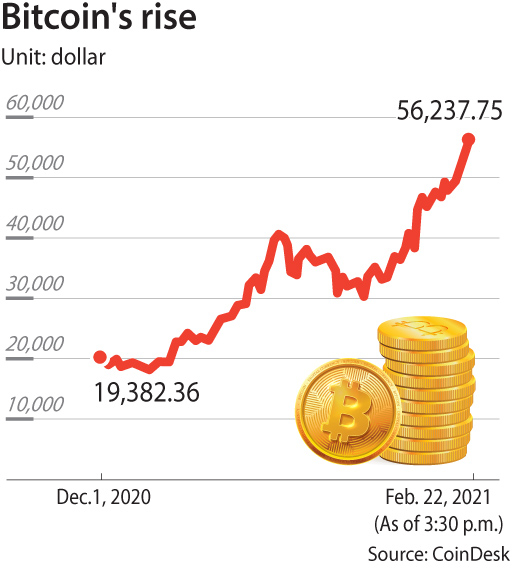 Some warn that the current popularity of bitcoin will not last as bitcoin will never be an alternative to stocks due to its riskiness.

“As bitcoin is a highly volatile asset, not everyone who used to invest in the stock market will jump into bitcoin investment,” said Jeong Yong-taek, a researcher from IBK Securities.

The possibility of tighter regulations on bitcoin is another issue.

U.S. Treasury Secretary Janet Yellen described bitcoin as “a high-risk, speculative investment” during an interview with CNBC on Feb. 18.

Ensuring that companies dealing in bitcoin and other cryptocurrency "adhere to their regulatory responsibilities I think is certainly important," she said.