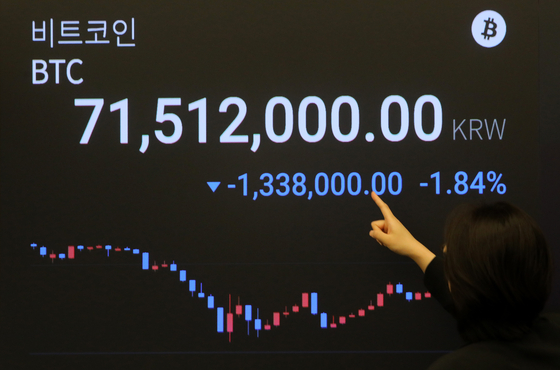 
A drop in the price of bitcoin in the U.S. is suspected to have been influenced by the cryptocurrency's price in Korea, which has been on a downward slope.

With the dwindling influence of the so-called kimchi premium – the gap between cryptocurrency prices on Korean and global exchanges – bitcoin prices on U.S. exchanges have dropped accordingly.

The same type of cryptocurrency can have a different price depending on the exchange it is being traded. For a long time, prices tended to be higher on Korea-based exchanges.

“The bitcoin price in Korea plummeted after the kimchi premium was pointed out as being too high,” said CoinDesk. “That led to weakened bitcoin demand throughout East Asian countries, further pulling down overall global prices.”

The bitcoin price on Korean cryptocurrency exchange Upbit soared to 79.5 million won on Wednesday afternoon, but slipped 8 percent to 71.5 million won as of 3:15 p.m. the following day. It climbed to 73.6 million won on Friday at 6 p.m.

The kimchi premium was first identified in 2016, when bitcoin started to become popular among Koreans. When the bitcoin price skyrocketed between late 2017 and early 2018, the price differential once reached nearly 50 percent.

The differential collapsed when bitcoin prices in Korea plunged in 2018, but the latest boom in cryptocurrency trading has revived it. The differential reached 20 percent as of Wednesday and dropped to 11 percent on Thursday. Based on the latest market prices, the bitcoin price is about 8 million won higher on Korean exchanges compared to foreign ones.

“The cryptocurrency boom, suggestive of that of 2017, is pushing the kimchi premium,” said Han Dae-hoon, an analyst at SK Securities.

The upcoming Nasdaq listing of cryptocurrency exchanges is believed to have increased the kimchi premium.


Bloomberg reported on Wednesday that U.S.-based Coinbase Global Inc. plans to directly list on the Nasdaq on April 14 and that Dunamu – operator of Korea-based Upbit – could make a similar move. Such expectations have fueled a frenzy among Korea investors for cryptocurrency stocks, Bloomberg said.

“There could be a correction in Korean bitcoin prices as the high kimchi premium will lead to gap-narrowing between global and local price differences,” said analyst Han. “However, a sudden drop in prices is less likely due to high bitcoin demand.”

Government intervention could put a brake on prices.

“Cryptocurrency is not legal tender nor are they financial investment products – no one guarantees the value,” said Moon Seung-wook, second vice minister of the Government Policy Coordination Office. “We will keep a close eye out for the market overheating and take stern measures against illegal activities.”