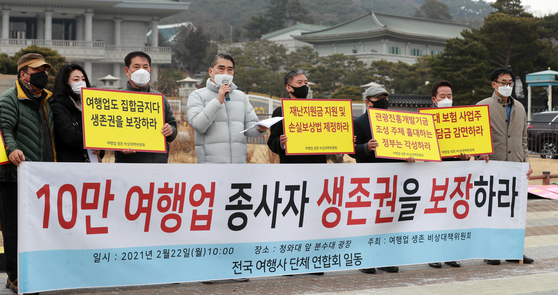 An emergency planning committee representing travel agencies demand the government ease regulations and expand support to revive its industry in front of the Blue House on Monday. [NEWS1]

Travel agencies say it's time to move on from Covid-19.

“The travel industry has basically halted due to the government’s request for people to refrain from travel and the 14-day quarantine period for travelers entering [Korea],” said Oh Chang-hee, a spokesperson for the emergency committee, at a protest held in front of the Blue House on Monday morning. “A lot of travel agency CEOs have had to take side jobs and can't pay back loans.”

Oh is also chairman of the Korea Association of Travel Agents (KATA).

Of 17,664 companies in the travel industry, according to data provided by KATA, 202 have gone bankrupt and 4,000 of them have practically shut down,

Out of 100,000 people working in the industry before the pandemic, 48,000 have lost jobs or been put on forced leaves.

The association on Monday demanded the government include the travel industry in its fourth round of emergency relief funding; reduce or allow delays of payments to what are known in Korea as the four social insurances (the national pension fund, health insurance, employment insurance and work-related injury insurance); easing of the two-week quarantine period; more loans for the industry; special laws designed to support travel-related businesses.

They stressed that the government should improve the environment for travel agencies instead of just giving out a million or two million won as temporary relief.

“In every briefing, the health authorities demand people refrain from gathering or traveling, and considered traveling as a sin,” Oh said.

He added that it wasn’t fair for the government to have excluded travel agencies from businesses helped in the second and third rounds of relief funds.

“Travel agencies can offer safer trips than when traveling on one's own because we can control itineraries and use buses or accommodations based on strict disinfection standards,” said Kim Myeong-ju, CEO of Seomoon Travel. “[I] hope the government provides guidelines on safe trips.”
BY JIN MIN-JI [jin.minji@joongang.co.kr]