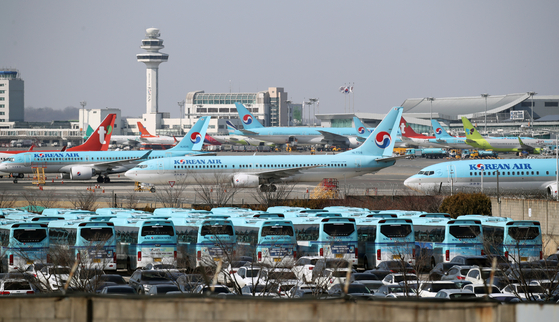 '
'The government promised help for airlines and the travel industry including expanding flights to nowhere, which have been popular during the pandemic.

Also on the cards is an easing of travel restrictions for travel to some other countries.

Budget airlines will be given government aid amounting to 200 billion won ($178 million).

These changes were announced in the wake of Covid-19 vaccinations that began in Korea last week.

According to the Ministry of Trade, Industry and Energy on Wednesday, the government will allow regional airports to run flights to nowhere. Currently only Incheon International Airport is allowed the run such flights -- which take off, go into the airspace of other countries and then return -- and is limited to three flights a day.

Passengers are allowed to purchase goods from the airport’s duty free shops.

The government will allow such flights from airports in other countries to enter Korean airspace.

The government will work on agreements with other countries such as Singapore and Thailand to ease travel restrictions.

The goal is to set up travel bubbles, partnerships between countries that succeeded in containing Covid-19 to allow people to travel between them.

Passengers will have to be tested for Covid-19 before departure and on arrival. But they will not be forced into quarantine and can make trips immediately without any other restrictions.

The government also said it will offer roughly 200 billion won in financial support to budget airlines including Jeju Air, T’way and Jin Air.

The details of the support will be announced later.

The airlines will enjoy a government discount on airport use until the end of June. The government will not bill hanger and airport apron charges. A 10 to 20 percent cut will be applied to landing fees.

“Due to the [government's] preemptive steps including some 10 support measures that were introduced [earlier] amid the unprecedented Covid-19 situation, we were able to overcome last year’s crisis,” said Minister of Land, Infrastructure and Transport Byun Chang-heum. “However, it will take time before the Covid-19 situation completely ends.

“The additional measure will not only maintain employment in our aviation industry until demand recovers but also enhance the competitiveness of [aviation] companies.”