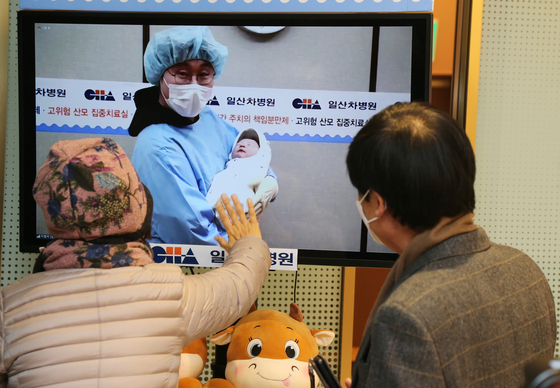 Grandparents welcome a grandchild born on the first day of 2021 via a monitor, because of social distancing regulations, in a hospital in Goyang, Gyeonggi. [YONHAP]

For the first time, Korea saw a natural decline in its population as the number of newborns fell and the number of people dying rose compared to the previous year.

The decline is expected to only accelerate as Korea’s fertility rate remains at an all-time low and the Covid-19 pandemic has an impact in unexpected areas like marriages.

According to Statistics Korea on Wednesday, 272,410 babies were born last year, a drop of 30,300 or 10 percent from the previous year. That was the smallest number of newborns since data started being compiled in its current form in 1970.

Some 305,100 people died, an increase of 10,017 or 3.4 percent. This was also the largest number of deaths since data since data started being compiled.

As a result, the natural population decline, which is the difference between new births and deaths, amounted to 33,000. 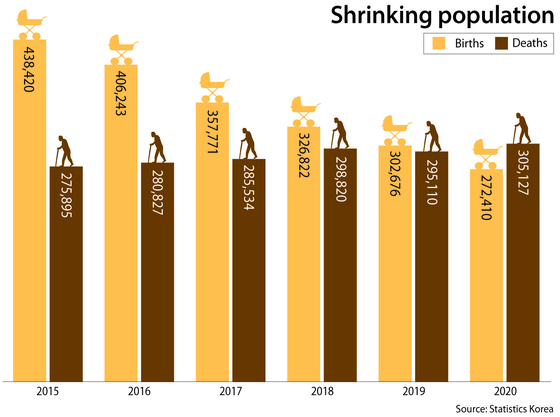 This was the first time that the number of people who passed away outnumbered newly born babies.

“The population decline is the result of the continuing low fertility rate and declining number of newborns, while the number of deaths is increasing due to the aging of society,” said Kim Su-young, head of the vital statistics division at Statistics Korea.

The decline is likely to continue especially considering the impact of the global pandemic.

“Especially in the case of last year, the number of people getting married declined sharply due to Covid-19 and this could further lower the number of newborns,” Kim said. “And because of the number of deaths likely to continue due to the aging of the population, the natural population decline could be steeper.”

Korea has the lowest total fertility rate among the 37 OECD member countries. It is the only country with a rate below 1.

A rate of 2.1 is needed to sustain a population. It is called the replacement rate, meaning each couple produces enough children to replace themselves.

Additionally, Korea has the highest average age for women giving birth to their first child, at 31.6.

The sharp drop in births by women in their 30s was the biggest factor, according to Statistics Korea.

The statistics agency did not cite Covid-19 as a key factor in the increase of deaths. It said details on the causes of deaths will be announced in September.