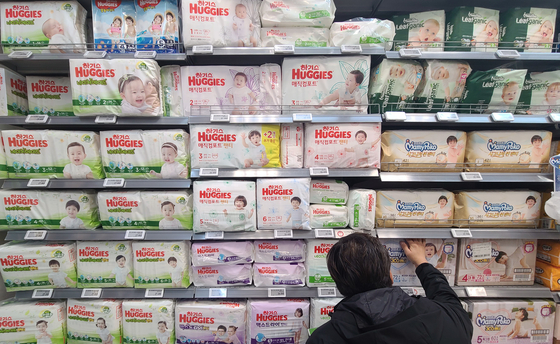 Baby dipers at a store in Seoul in October. The number of newborns have been shrinking 70 consecutive months as people are reluctant to get married. [YONHAP]

Births and marriages are down and deaths are up, according to Statistics Korea Wednesday.

In September, 21,920 births were recorded, down 6.7 percent on year. The number of newborns has been shrinking for 70 consecutive months.

The low birthrate and society aging will lead to a continued decline in the population.

On top of the social changes, including women becoming reluctant to get married, as they are becoming more economically active, and young couples less prone to get married due to the high costs, the ongoing Covid-19 pandemic and social distancing regulations resulted in a decline in the number of weddings.

“On average, couples have children two to three years after they get married,” said a statistics agency official. “The shrinking number of couples getting married is a signal that the declining number of newborns will continue for the next couple of years.”

Last year, the number of births dropped below 300,000 and the annual fertility rate hit a record low of 0.84.

The shrinking population is particularly affecting villages in rural areas.

On Tuesday, the government announced that it be spending 1 trillion won annually for the next 10 years to prevent villages from vanishing.

Finance Minister Hong Nam-ki said Tuesday that with the 1 trillion won in funding and the government’s earlier plan of connecting rural areas with major cities with transportation infrastructure, competitiveness of areas outside of Seoul and Gyeonggi will improve.

Number of births in first quarter declines 4.3 percent on year