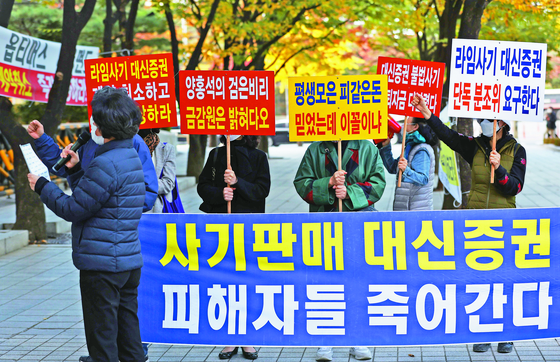 Lime investors hold a rally in Yeouido, western Seoul, on Oct. 29, 2020, demanding a full return of their investment money. [YONHAP]

Woori Bank and the Industrial Bank of Korea (IBK) have been ordered to make restitution for up to 78 percent of some investments made in Lime Asset Management funds.

Lime, which was once the largest hedge fund in the country with about $4 billion of assets, halted withdrawals from some funds in late 2019. Over
1.6 trillion won ($1.4 billion) of investor money has been frozen. Managers of the funds are alleged to have been engaged in a Ponzi scheme.

The regulator has been mediating disputes between fund sellers and investors, and the committee said Wednesday that the reimbursement rate for three investors that signed up for Lime funds through Woori Bank and IBK will range between 65 and 78 percent, depending on factors like level of investment experience.

IBK will have to compensate 65 percent of investments to a retiree after not explaining about the dangers of the funds though the investor asked for the bank to recommend fixed deposit products.

In December, KB Securities was ordered to make restitution for up to 70 percent of some investments made in Lime.

The FSS said it will encourage the banks and the securities company to voluntarily settle disputes with other investors asking for redemption by setting reimbursement rates based on the Tuesday's ruling.

There have been 182 complaints registered against Woori Bank regarding sales of Lime funds and 20 complaints against IBK.

An arbitration committee was formed as the two banks had agreed to compensate investors upfront, before their actual losses from the investments have been confirmed, as it is expected to take four to five years for investors to finalize losses by selling their funds.