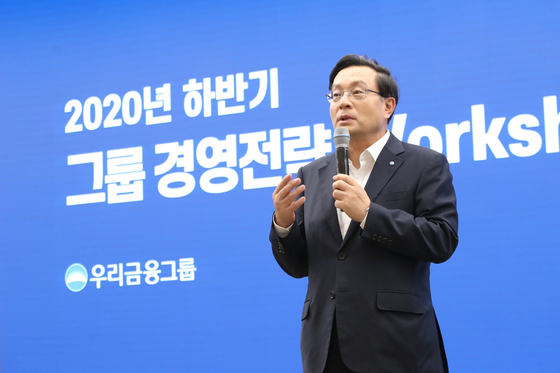 Woori Financial Group Chairman and CEO Son Tae-seung has been sanctioned by the Financial Supervisory Service (FSS) and could be barred from another term as an executive or as a board member of the company.

The punishment comes due to the selling of risky Lime Asset Management funds to retail customers. Many of these customer lost money after the funds were frozen.

Son was the head of Woori Bank, a group subsidiary, when the bank was marketing the Lime funds.

A sanctions review committee of the FSS Friday said it was issuing a reprimand warning to Son.

The warning bars Son from holding positions at financial companies for three years, although current terms can be completed. A reprimand warning is the third highest level of punishments out of five available options for the committee.

The FSS committee also decided to punish Woori Bank by suspending part of its operations for three months and imposing fines. The amount of fines was not revealed. Among banks, Woori Bank was the largest seller of Lime funds.

The sanctions imposed on Son and the bank are lighter than mentioned by the FSS earlier, before the committee started its meetings to finalize the level of the punishments.

It had previously notified Son that he will be subject to suspension of duty, which would result in his immediate removal from the positions. The financial regulator also notified Woori Bank that it would be subject to six months of partial suspension in operations.

Woori Bank said the committee has taken into consideration its recent efforts to protect customers, in statement Friday.

Woori Bank last year accepted a recommendation by the FSS dispute settlement committee to give full refunds on 65 billion won ($58 million) worth investments made by investors who subscribed to Lime Asset Management's trade finance fund, or Pluto TF-1, after November 2018.

In March, the bank accepted another recommended compensation plan set out by the FSS committee regarding other Lime funds. The committee ordered it to pay restitutions for up to 78 percent of some investments made in Lime funds.

The sanctions announced by the FSS are subject to approval by the Financial Services Commission (FSC).

Woori Bank said in statement that the bank plans to explain to the FSC that as a seller it was restricted from obtaining all information about the product it was selling and so "it was not in a position to recognize risks involved with Lime funds."

A source from the bank said, "The bank is hoping the level of punishment to get even lighter as the FSC reviews the matter."

The decisions were made during a committee meeting held Thursday to discuss the level of punishments for Woori Bank and Son. It was the third meeting on the issue after the committee failed to reach a conclusion during previous meetings held on Feb. 25 and Mar. 18.