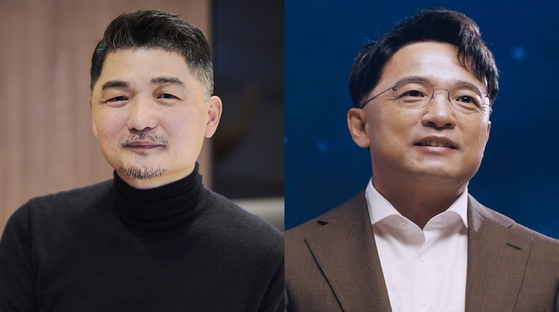 
Tech companies traditionally took a back seat at business lobbying groups in Korea, eclipsed by a strong grip of manufactures with longer corporate histories.

But the chiefs of gaming and messenger companies are becoming leaders as their market capitalizations grow and their influence increases.

Kakao Chairman Kim Beom-su and NCSoft CEO Kim Taek-jin were named vice chairmen at the Korea Chamber of Commerce and Industry (KCCI) earlier this week along with the nomination of new chairman Chey Tae-won from SK.

The duo will work with existing vice chairmen from Samsung Electronics, Hyundai Motor and Korean Airlines to make key decisions in a regular meeting with the chairman at the association.

The major lobby explained that the appointments are intended to reflect the increasing clout of the technology companies.

The numbers bear out their influence.

Kakao, for instance, has marched into the top 10 list by market capitalization as the digital transformation, helped by the pandemic, boosted the company’s revenue and prospects.

Its market cap ranked ninth on the Korea Exchange at 42.96 trillion won based on the closing price on Thursday.

Kakao’s annual revenues broke the 4-trillion-won level for the first time last year while NCSoft surpassed the 2-trillion-won mark during the same period.

Not all new leaders specialize in IT service and gaming.

The Federation of Korean Industries, another business lobby, reappointed incumbent Chairman Huh Chang-soo on Thursday to head the organization, saying that Huh is an ideal figure to navigate tough economic conditions thanks to his experience at the top of the federation.