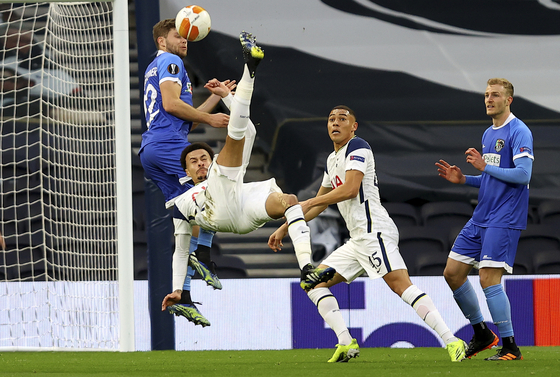 Spurs got off to a quick start against Wolfsberger, with Dele Alli breaking the ice in the tenth minute with a stunning overhead kick to remind everyone, including manager Jose Mourinho, exactly what the oft-sidelined midfielder is capable of.

It wasn't until the second half that Spurs really started the rout, adding a second goal from Carlos Vinicius in the 50th minute and a third from Gareth Bale in the 73rd. Vinicius came back ten minutes later to add the fourth goal in the 83rd minute, cementing Spurs' win.

Alli proved crucial throughout the game, not only scoring the opener, but also assisting both Vinicius and Bale to walk away with two assists and a goal.

With the 4-0 win, Spurs beat Wolfsberger with a huge score of 8-1 on aggregate, decisively earning a spot in the Round of 16. The London club will find out who they face next when the Round of 16 draw is held on Friday. The first legs of the next round will begin on March 11 with the second legs from March 18.

Spurs have won the Europa League twice, most recently in 1984 when they beat German side Anderlecht on penalties in the final.

Both Son Heung-min and captain Harry Kane sat out the Wolfsberger game, with Mourinho no doubt choosing to save the attacking partnership for the weekend's English Premier League clash against Burnley. Despite their success in Europe, Spurs have struggled in the domestic league, losing five of their last six games.

The match against 15th-ranked Burnley may be a chance for Tottenham to pick up a much-needed three points.

Spurs will be back in action on Sunday against Burnley. The match will be broadcast at 11 p.m. in Korea.