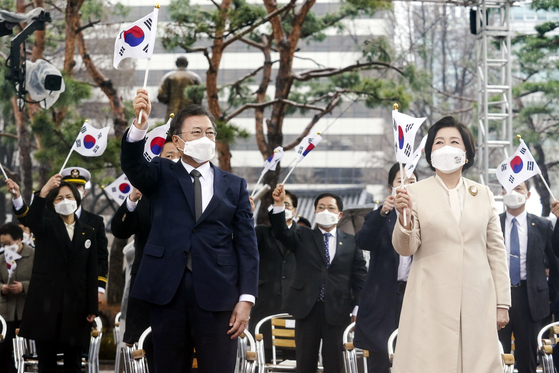 
Korea is always ready for talks with Japan, President Moon Jae-in said in his March 1 address Monday, noting that improved bilateral cooperation would be helpful in a trilateral partnership with the United States.

"The Korean government is always ready to sit down and have talks with the Japanese government," Moon said in his address marking the 102nd anniversary of the March 1 Independence Movement. “I am confident that if we put our heads together in the spirit of trying to understand each other’s perspectives, we will also be able to wisely resolve issues of the past.”

In a nod to the new Joe Biden administration’s push for three-way cooperation with Washington’s closet allies in the region, Moon added, “Bilateral cooperation will not only benefit our two countries but also facilitate stability and common prosperity in Northeast Asia and the trilateral Korea-United States-Japan partnership.”

The address was made in a smaller-scale ceremony of some 50 people in the midst of pouring rain at Tapgol Park in Jongno District, central Seoul — a historical location where the Declaration of Independence was proclaimed, kicking off Korea's peaceful, nationwide demonstrations that began on March 1, 1919, to protest Japan’s colonial rule over the Korean Peninsula, which lasted from 1910 to 1945.

Moon noted that the Korean government will always pursue solutions “based on a victim-centered approach” and “do everything possible to restore the honor and dignity of victims,” while also mentioning such efforts will not be an impediment to “Korea-Japan cooperation and forward-looking development.”

This marked Moon’s fourth March 1 address, a speech which has traditionally set the tone for Korea’s foreign policy for the year, particularly concerning Japan.

Korea will work together with Japan for the success of the upcoming Olympics, said Moon. He added that he hopes the two countries will be able to revive their economies and “jointly create a new order in the post-Covid-19 era through even more robust cooperation.”

“We cannot forget the history,” said Moon. “The perpetrator might be able to forget, but the victim will never be able to.”

However, Moon stressed that Korea and Japan “have become very important neighbors to each other” in economic, cultural and people-to-people exchanges, noting that each country’s growth and competitiveness has assisted the other.

“The only obstacle we have to overcome is that, sometimes, issues of the past cannot be separated from those of the future, but are intermingled with each other,” said Moon. “This has impeded forward-looking development. […] It is by no means shameful to learn a lesson from past wrongs, but it is rather a way to gain respect from the international community.”

Reiterating his two-track approach to Japan, Moon said that Korea, while never forgetting its shameful history of being colonized or the pain of the 1950-53 Korean War, has to “concentrate more energy on future-oriented development while resolving issues of the past separately.”

Likewise, Moon pledged to continue to make efforts for denuclearization and permanent peace on the Korean Peninsula.

He encouraged North Korea to “cooperate and interact with the countries in the region, beginning with its participation in the Northeast Asia Cooperation Initiative,” expected to “become a driving force to create a breakthrough for mutual benefit and peace on the Korean Peninsula and in East Asia.”

Moon stressed the importance of solidarity, cooperation, multilateralism and inclusiveness in the fight against Covid-19, noting that the “spirit of cooperation is indispensable for maintaining the global supply chain.”

He likewise pledged that the government will do its utmost for Covid-19 vaccinations in the country to “achieve herd immunity by November."

Moon also said that Korea’s invitation to an expanded Group of Seven, or G7, summit hosted by Britain in June, will mark the launch of the Republic of Korea as a "pacesetter," building on its political, economic, social and cultural achievements.

This year’s speech contrasts with past March 1 addresses in which Moon came down more harshly on Japan. In his 2018 address, Moon said that the so-called comfort women issue is an “issue of a crime against humanity committed in time of war that cannot be closed with just a word.”

This year’s address spent less time on North Korea issues, with a heavier focus on the coronavirus pandemic and Japan relations. “Cooperation” was the most common word of the speech, appearing 19 times, followed by “Covid-19” appearing 16 times.

The Moon Jae-in government has consistently sent a reconciliatory message to Japan since the launch of the Yoshihide Suga administration last September.

However, Japan’s Kyodo News on Monday reported on Moon’s address, saying “there were no specific requests or new proposals for the Japanese government.”

How to keep dividing the nation