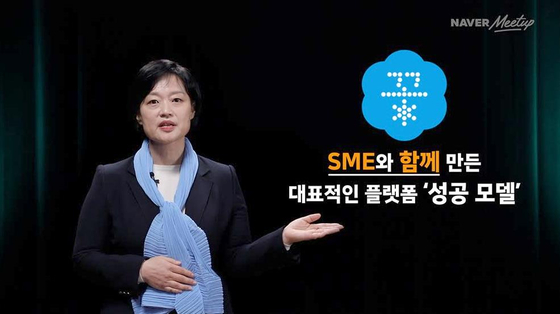 Over the next three years, Naver is promising to build a logistics system that helps vendors on its platform, from farmers to merchants in Dongdaemun’s fashion market.

The business has shown notable growth over the past year but in terms of delivery speed, Naver is considered slower than Coupang.

As a trial service, Naver is currently offering fast delivery of products that don't need refrigeration. The parcels arrive the next day if ordered before 11:59 p.m.

The next step is offering delivery of fresh foods through cold chain logistics, and even product that require special care. It is partnering with external logistics companies that specialize in different product segments. Last month, Naver signed an agreement with CJ Logistics, Korea’s largest logistics firm, to work together on fast deliveries.

“For daily necessities, which a lot of customers want fast, we’re expecting next-day delivery to be available from this year,” said Naver CEO Han Seong-sook in an online press conference Tuesday.

“Naver Smartstore is being used by more than 400,000 businesses and each has different logistics needs. Naver’s competitiveness as an online mall doesn’t come from buying products and reselling them, but offering a platform on which each store can establish its own brand and grow their businesses. Our goal is to help them focus on sales while Naver takes care of the rest.”

As part of a project to support local vendors, Naver has helped digitization of 80 traditional markets in Korea, enabling merchants to sell products through its website. That figure will increase to 160 this year, the company said.

Another big initiative for Naver in 2021 is establishing a global logistics system for Dongdaemun’s fashion market in central Seoul, a decades-old hub of fashion retailers and wholesalers.

“Resolving the logistics issue alone can create a score of new business opportunities using Dongdaemun’s fashion infrastructure,” said Kim Pyeong-song, who leads Naver’s business development team. “We plan to design Dongdaemun’s logistics system to be ‘cross-border’ so that small fashion companies can easily expand their business to a global level.”

Their first overseas market is likely to be Japan. On Monday, Naver announced that the Smartstore model would be implemented in Japan during the first half of this year. It would be one of Naver’s first projects in Japan since establishing the joint venture A Holdings with Japan’s SoftBank.

“If the service settles well, we’ll search for Dongdaemun fashion brands that may work in Japan and provide support to conduct business, globally,” said Han.

“For small businesses, expanding business overseas goes beyond simply uploading products on a foreign website,” she added. “There needs to be a lot of study of stock management, shifting product information into data and logistics. Once that’s completed, we’ll start developing the framework [for small businesses’ global sale support] starting with Dongdaemun merchants.”

The strategies are part of Naver’s long-term drive to support small businesses and individual enterpreneurs, for whom Han pledged in November to invest 180 billion won in services supporting their growth over a two-year period.