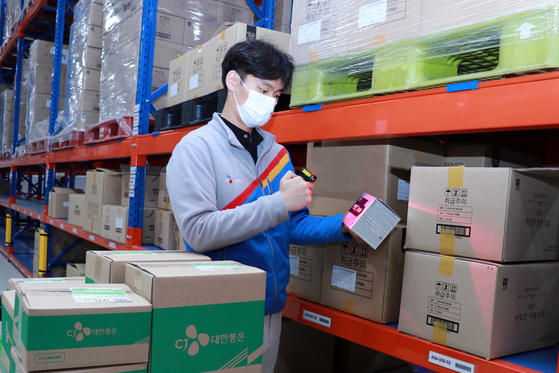 An employee at CJ Logistics works at a new fulfillment center jointly operated with Naver in Gunpo, Gyeonggi. [CJ Logistics]


Naver is expanding its logistic network to stay ahead of competitors like Coupang, following the delivery model pioneered by Amazon in the U.S.

The tech company, which has an e-commerce platform integrated into its internet portal Naver, jointly opened a fulfillment center with CJ Logistics in Gunpo, Gyeonggi, to expand next-day shipping services.

The two companies will open another fulfillment center in Yongin, Gyeonggi, in August.

The expansion of next-day delivery is a direct challenge to e-commerce specialist Coupang, known for its next-day Rocket Delivery system.

Presently, some orders placed on Naver before 3 p.m. are delivered the following day. The company wants to offer next-day delivery for orders made before midnight.

Unlike typical distribution centers that receive products from sellers after receiving an order, fulfillment centers stock a wide variety of products to shorten shipping times.

The Gunpo center specializes in products that can be stored at room temperature. The Yongin facility will handle goods at low temperatures.

Naver is trying to employ its technological prowess to predict the inventory needed and the number of delivery men required based on analysis of previous orders.

Clova Forecast, an artificial intelligence-based analytics program developed by the company, will be used by the two new facilities.

The AI program allegedly has an accuracy rate of 95 percent in predicting orders even during highly-unpredictable periods when big discounts are offered.

Still, Naver’s next-day delivery service is limited to 320 brands, although it plans to extend that.

Industry analysts say it will take time for Naver to include a greater variety of products for next-day deliveries, and point out that neither of the two new centers will be used for groceries.

Coupang delivers about 3 million packages by Rocket Delivery every day, half of which are agricultural products.
Food-specialized Market Kurly handles around 130,000 boxes a day and Shinsegae’s SSG.com 450,000 to 500,000 boxes.

“So far, none of the companies can provide next-day delivery for all goods they sell,” said a source in the e-commerce industry.
“This means that the competition will heat up among the companies to get an upper hand."