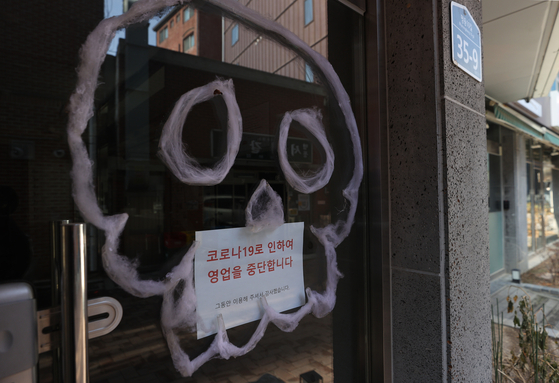 A store in Myeong-dong, central Seoul, is seen Wednesday with a notice saying it is closing due to Covid-19. The pandemic has devastated many small businesses especially in the services sector. [YONHAP]

According to a report by the Bank of Korea Wednesday, companies and self-employed people borrowed 185.9 trillion won ($165.7 billion) from depository institutions including banks and savings banks last year, a record amount.

As of the end last year, total borrowing by  companies and the self-employed stood at 1,393.6 trillion won.

While borrowing by the manufacturing sector actually declined in the fourth quarter compared to the previous quarter, borrowing from the services sector continued to see strong growth.

Loans held by companies and the self-employed in the manufacturing sector at the end of last year amounted to 392.8 trillion won, a 10 percent increase on year. Compared to the balance of 395 trillion won in the third quarter of 2020,  the figure declined by 2.2 trillion won or 0.5 percent in the fourth quarter, meaning companies had paid back rather than borrowed.

"Borrowings by the manufacturing sector declined in the fourth quarter [compared to the previous quarter] as their businesses slowly recovered," said Song Jae-chang, head of the monetary and financial statistics team at the central bank during a briefing held Wednesday. "Also in the fourth quarter, businesses usually pay back debt to improve their balance sheets."

Song said borrowing remained strong through the fourth quarter for those in services as confirmed cases of coronavirus in the country continued to increase.