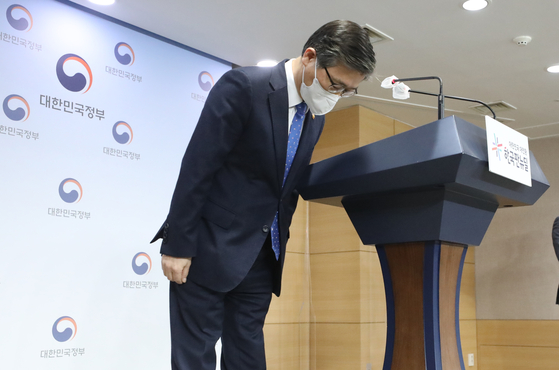 Land Minister Byeon Chang-heum on Thursday apologized after a group of Korea Land and Housing Corp. employees were accused of buying land using insider information during a press briefing in the government complex in central Seoul. [NEWS1]

In his comments, he suggested that some of the accusations may be accurate, at least in part.

"As a minister of Ministry of Land, Infrastructure and Transport and former head of the institution, I feel deeply responsible for this issue," Byeon said during a briefing at the government complex in central Seoul.

"Some of what has been alleged turns out to be true, and I sincerely apologize for the situation that such an incident happened at a public institution which is responsible for carrying out public development projects based on transparency and credibility," Byeon added. "Under the direction of the prime minister’s office, we have started a full investigation of all employees of Ministry of Land, Infrastructure and Transport, related public institutions and local governments,"

Byeon said strong actions will be taken if any violation is confirmed, adding that the ministry will arrive at a conclusion and "countermeasures to prevent a recurrence as soon as possible."

Earlier the week, People’s Solidarity for Participatory Democracy (PSPD) and Lawyers for a Democratic Society (Minbyun) accused 14 LH employees of purchasing land in Gwangmyeong-Siheung, Gyeonggi. LH itself found one more employee who may have purchased land in the area.

The purchases were on the site of a 70,000-unit New Town development announced by Land Ministry announced last month.

LH employees or their families are accused of purchasing 23,000 square meters (5.7 acres) of land for roughly 10 billion won ($8.9 million) before the plan was made public, raising the possibility that they used confidential information in choosing the land.

The purchases were made between April 2018 and June this year, which overlaps with the time when Land Minister Byeon headed LH. Byeon served as the head of the state-owned developer between April 2019 and December last year.

Earlier the day, LH apologized, though the state-owned company is still investigating the alleged purchases and has not yet determined whether the accusations are true.

“In cooperation with the government, we will conduct a thorough investigation of the land transaction status of employees and families of related departments for the entire Third New Town as quickly as possible, and we will make every effort to reveal the fact so that the public would not have any doubts.”

“Taking this situation as an opportunity, we will establish discipline by innovating the internal organization on a large scale and powerfully,” the apology added.

The developer said it will introduce a new system that requires all of its employees and their families to pre-report to the company when they make any land transactions.

President Moon Jae-in on Thursday spoke about the issue.

“The government should eradicate the problem by confirming if the scandal is committed just by some LH employees or is attributable to deep-rooted corruption,” President Moon said, according to the Blue House spokesperson Kang Min-seok.

President Moon added that the government should take “swift and stern” action when investigating the issue.