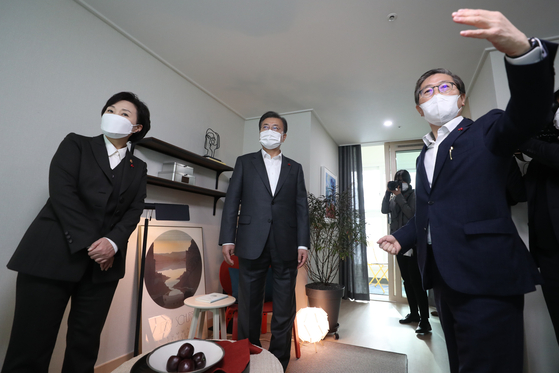 
President Moon Jae-in has stepped in fresh controversy after an opposition lawmaker’s revelation that the government spent lavishly on window dressings for a public rental housing project that Moon inspected last week.

Kim said Wednesday that she obtained detailed records from the LH about its preparation for Moon’s inspection. LH spent 6.5 million won to rent interior decoration items, curtains and furniture to stage the houses, and another 33 million won on repairs. 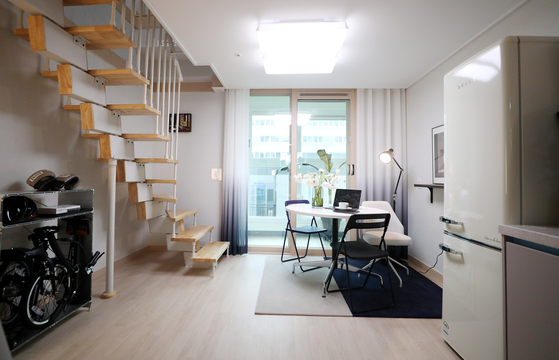 
According to Kim, LH also had a budget of 410 million won to prepare and promote the event — although the Ministry of Land, Infrastructure and Transport disputed this, saying in a statement that the amount was the overall budget for promoting public housing projects.

“After we balance accounts later, the actual amount spent will be much smaller,” the ministry said in a press release.

Ahead of the event, LH conducted construction projects to repair and decorate the units. Residents of the complex posted complaints on the online community board that they were woken up by construction noise, as the repair work continued until the early morning prior to Moon’s visit.

As the controversy grew, the Land Ministry responded that there was no major remodeling of the units.

It also said the two apartments will be used as model houses in the future. The rental contract for the interior items and furniture, however, expires at the end of this month.

Kim, the lawmaker, said residents of the public housing project are suffering from problems associated with poor construction work, such as water leaks and mold, but the LH and the ministry put on a show to present the apartments as well-constructed.

“For the president’s event, they displayed a fantasy, far different from the reality of the people who actually live there,” she said.

Construction problems of an apartment inside the Dongtan Happy House Complex. [Office of Rep. Kim Eun-hye of the People Power Party]


The ministry said it will repair problems if the residents complain.

LH built the Dongtan Happy House Complex, comprising 1,640 units, in 2017. The project has proved unpopular, however, and 410 units remain vacant. Of the 100 duplex units, 33 are vacant — including the one staged as a model home for Moon’s visit.

The complex also has 450 of the 172-square-foot units, and 210 of them are vacant. LH received applications in September last year and again this year, but failed to rent out the units.

The visit had already touched a nerve last week, amid the ongoing public criticism of the Moon administration’s failure to curb skyrocketing housing prices.

When Moon inspected the 474-square-foot, two-bedroom apartment, he reportedly remarked on its coziness and told Byeon that the unit is big enough for a family of two parents and two children, to which Byeon agreed.

Those remarks generated more outrage, as many people argued the house is too small for a four-person family.

Presidential spokesman Kang Min-seok responded on Saturday that Moon was asking Byeon a question, and was not concluding that the apartment was sufficiently big.

That, however, did little to calm the outcry.

“Whether it is a question or not is not important,” Rep. Kim said. “It’s not normal to look at that tiny apartment and make such a remark.”

Kim added that the people want to own homes, not live in public housing projects.

“People are frustrated because the president is telling them to live in small public rental housing forever,” she said.

An online petition was also posted Saturday on the Blue House’s website, suggesting the retirement home of Moon and his wife should be no larger than a 213-square-foot house. The petitioner said it should be large enough for the presidential couple since they have no children to live with.

It was reported in June that Moon has purchased about 28,289 square feet (0.65 acres) of land in Yangsan, South Gyeongsang, to build his retirement home. The Blue House said the president’s home will occupy 2,846 square feet and other security facilities will be built on the site.

Moon says developing greenbelt areas is off the table