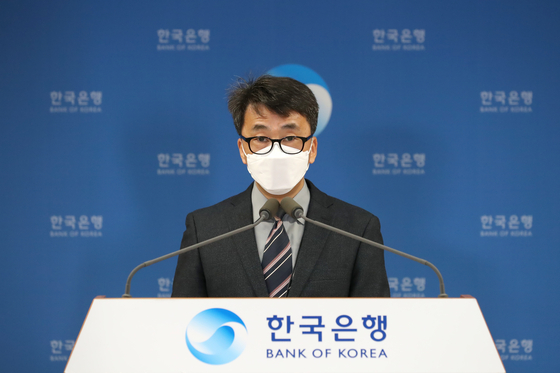 Shin Seung-cheol, director of the national accounts division at the Bank of Korea, speaks during an online briefing held Thursday. [BANK OF KOREA]

Korea’s economic growth last year was the lowest since the 1998 Asian economic crisis, according to data from the Bank of Korea Thursday.

According to data from the central bank, the country’s nominal gross domestic product (GDP) last year was 1,924.5 trillion won ($1.71 trillion), which represented only 0.3 percent growth over the previous year.

That was the lowest rate since the minus 0.9 percent growth recorded in 1998. When converted into U.S. dollars, the nominal GDP contracted by 0.9 percent due to the Korean won's weakness against the greenback.

Growth of real or inflation-adjusted GDP last year was minus 1 percent. It was the first negative growth in 22 years since the minus 5.1 percent recorded in 1998. Private consumption dragged down GDP growth, as it fell 4.9 percent on year as people spent less on food, lodging as well as clothes and many stayed home due to Covid-19.

Nominal gross national income (GNI) grew 0.2 percent to 1,940.3 trillion won. This was the lowest since minus 1.6 percent growth in 1998. A decline in Korean’s net factor income from the rest of the world pulled down growth of GNI.

Per capita nominal GNI, which is the GNI converted to U.S. dollars and divided by a country’s population, shrank by 1.1 percent to $31,755 last year. It was the second year the figure dropped on year after shrinking by 4.3 percent in 2019.

“There have been cases where per capital GNI declined for two straight years in the past and they were when there was the foreign exchange crisis in 1998 and the global financial meltdown [in 2008],” said Shin Seung-cheol, director of the national accounts division at the Bank of Korea, during an online briefing held Thursday.

Asked whether the Covid-19 pandemic was as big a crisis as the past two events, Shin said that the pandemic did not bring about as big a shock to the financial markets as earlier crises.

“However, as the major reason behind the crisis is fundamentally different compared to past events," he said, "we will have to see whether the economy will be able to recover in the coming year.”

The GDP price deflator, which measures changes in prices for all goods and services produced in an economy, grew by 1.3 percent last year. The deflator growth turned to a plus, after recording minus growth in 2019, at minus 0.9 percent, for the first time in 13 years.

Economy grows 3.1 percent on year in the first quarter