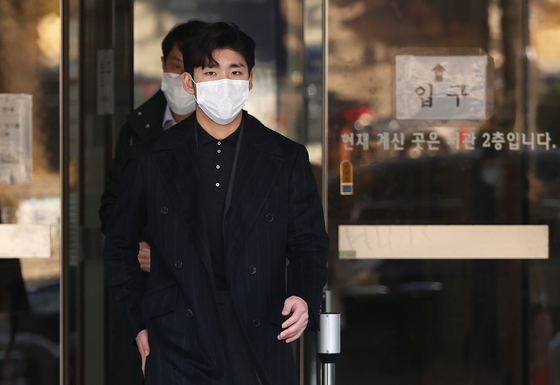 Lim Hyo-jun, a 2018 Pyeongchang Winter Olympics gold medalist, chose to naturalize as a Chinese citizen and continue his career as a player for the Chinese short track team. The photo shows Lim leaving the court after being acquitted in the second trial held at the Seoul Central District Court in Seocho-gu on Nov. 27, 2020. [YONHAP]


Olympic short track speed skating gold medalist Lim Hyo-jun has applied for Chinese citizenship because he has been prevented from practicing in Korea and competing under the Taegeukgi due to a sexual harassment charge.

Brion Company, Lim’s agency, said in a statement released Saturday that the skater has decided to naturalize as a Chinese national due to the “difficulties and disappointments of not being able to continue his career.”

According to Korean reports, Lim left for China last Friday after completing the Chinese special naturalization process, and will join the Chinese short track national team training as soon as he finishes self-quarantine.

Some media say he is already Chinese citizen with a passport and has renounced his Korean citizenship.

Lim was the ace of the Korean men's short track team, winning a gold medal in the men's 1,500-meter short track speed skating event and a bronze medal in the 500 meters at the 2018 PyeongChang Winter Olympics.

In June 2019, Lim allegedly pulled down the pants of a fellow skater during a rock climbing training session at Jincheon National Training Center, exposing the male teammate while female skaters were present.

The Seoul Central District Public Prosecutors' Office ordered Lim to pay a 3 million won ($2,660) fine in May 2020, but the appellate court found him not guilty six months later, as the victim was found to have acted aggressively toward the women present. The court also said it was difficult to claim what Lim did was sexual harassment.

The case is currently before the Supreme Court. If the top court overturns the appellate court's decision, the suspension will restart, which will then rule out Lim's chances of skating at next year's Winter Olympics to be held in Beijing.

"As the trial and the Skating Union’s disciplinary period have been prolonged, it has become difficult for Lim to continue his dream of going to the Olympics with the Taegeuk mark," the agency wrote.

“Lim wanted to win his second straight Olympic gold medal in Beijing as a Korean representative, but he hasn't been able to train anywhere in Korea for the past two years. He just wanted to find ways to put his skates back on as an ice skater," the agency added.

In an interview with OSEN in January, Lim acknowledged China’s suggestion he join its team as a player and a coach.

“I want to play in Korea no matter what. I really like my country. I felt it again at the Pyeongchang Winter Olympics. It was the happiest and most rewarding thing while training,” Lim said.

Cha and Kim unable to make an impact in 1,000 meters