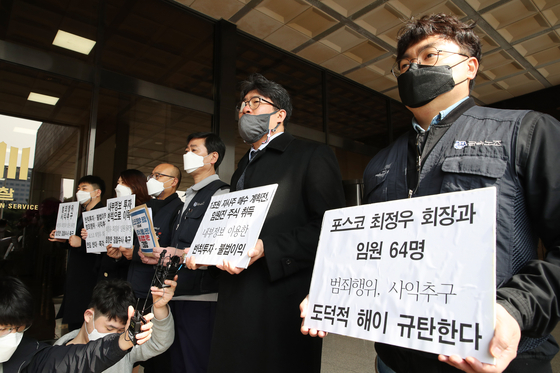 Activists of Lawyers for a Democratic Society, the People's Solidarity for Participatory Democracy and the Korean Metal Workers' Union report 64 Posco executives to Seoul Central District Prosecutors for violating the Financial Investment Services and Capital Markets Act, on Tuesday. [NEWS1]

The steelmaker immediately dismissed the claims.

The civic groups claimed the executives purchased 19,209 shares in Posco between March 12 and March 27, 2020, which at the time was worth around 3.3 billion won in total.

On April 10, 2020, Posco’s board approved purchasing 1 trillion-won worth of treasury stock with the intention of supporting the price of the shares. At that point, the steelmaker had lost nearly 30 percent of its market cap over a three-month period due to impact of the coronavirus.

“Posco’s 1 trillion-won buyback was equivalent to 6.44 percent of Posco’s market cap back then,” they said in a joint statement. “Stock trades using undisclosed information ahead of public announcement that could boost stock prices is an illegal act.”

Posco said in a statement Tuesday afternoon that activists were misconstruing the top executives’ efforts during a time of hardship.

“March 2020 was a time when Covid-19’s spread was increasing volatility in the domestic finance market,” the steelmaker said in the statement.

“The company’s stock prices slumped 42 percent from earlier on in the year, and executives voluntarily decided to purchase stock as a way of showing their will for responsible management to the market.”

According to the company, the buyback plan was the result of requests from institutional investors and was hurriedly decided. Therefore, Posco’s senior executives were not aware of the plan at the time of purchase and these executives have not sold off the shares they bought last year, it said.

“Posco’s executives will actively participate in prosecutors’ investigation--which we hope will reveal the truth,” the company said.