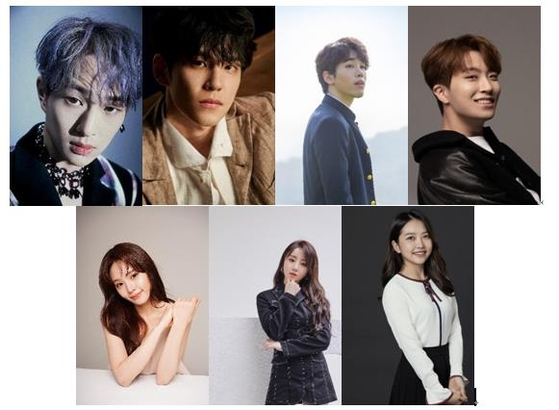 Clockwise from left, singers and actors Onew from Shinee, Wonpil from DAY6, Cho Hun, Youngjae from Got7, Lee Ah-jin, Kei from Lovelyz, and Kang Hye-in will all feature in lead roles for the upcoming musical ″Midnight Sun.″ [SHINSWAVE]


An array of K-pop idols including Onew, Wonpil and Youngjae from boy bands Shinee, DAY6 and GOT7, and Kei from girl group Lovelyz will star in upcoming Musical “Midnight Sun.”

The production company Shinswave released the list of the cast Tuesday for the musical which is scheduled to premiere in Kwanglim Arts Center in southern Seoul on May 1.

The musical tells the story of a boy who meets a girl who can’t be exposed to direct sunlight.

The story has been beloved by the global audience for decades. The original derives from a 1993 Hong Kong film of the same name and has been adapted to a Japanese novel, film, and drama series and also has a Hollywood remake.

The company announced that it will be live streaming the musical throughout its run which ends on July 25. Tickets can be purchased through reservation site www.ticketlink.co.kr from Friday.