Bitcoin exchanges to be subject to heavy fines by FSS

Bitcoin exchanges to be subject to heavy fines by FSS 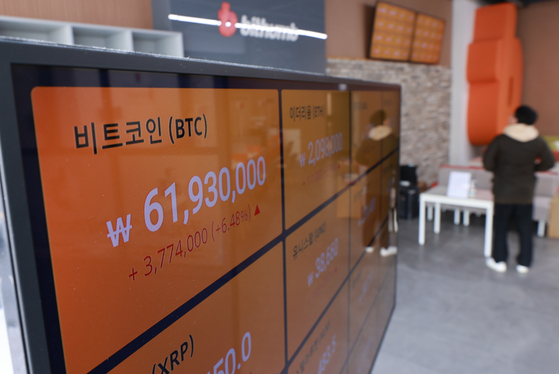 An electronic signboard at Bithum’s Gangnam center shows the value of bitcoin trading above 61 million won ($53,500), which is a new record, on Tuesday. While the Kospi has fallen below the 3,000 mark, investors have been flocking to the virtual currency. [YONHAP]


As investors flock to bitcoin, boosting the value of the cryptocurrency to an all-time record, financial regulators say they will change regulations to fine cryptocurrency exchanges that do not actively take action against illegal activities.

The Financial Services Commission (FSC) on Wednesday said it will be fining exchanges that fail to follow three regulations: those on internal controls, information and data retention and the verification of the identity of cryptocurrency traders.

The exchange operators have to retain all information and data on suspicious transactions, including those made via large amounts of cash.

They have to manage the accounts of each customer separately while only allowing customers whose identities have been verified to make transactions on the exchange.

Depending on the severity of the violation and whether it is intentional or not, the fine could vary from 30 percent to maximum 60 percent of the legally approved maximum amount.

The maximum amount could be different accordingly to the violations committed.

The fine can be reduced up to 50 percent.
.
The cut will be based on whether the operator has the ability to pay the fine as well as the context of the violation, such as the violation being the result of a pure mistake.

Aware of the growing interest in cryptocurrency, the Korean authority has been increasing its measures on bringing virtual currency transactions to the conventional financial system, including taxing the transactions.

Starting next year, the government will tax 20 percent of cryptocurrency investment gains. However, the profit has to exceed 2.5 million won ($2,200) annually.

Additionally, a 50 percent inheritance tax will be imposed on the cryptocurrency assets.

Unlike the equity market, which recently turned from a bullish rally earlier this year to weakness in the last couple of trading days, the virtual currency value has been ascending to new records as investors have been flocking to it as during the hype-driven rallies of 2017.

Bitcoin, which broke 60 million won per coin for the first time in two weeks on Tuesday in the local market, was trading at 61.5 million won as of noon Wednesday. Bitcoin broke the 40-million-won barrier in January and in just a month broke the 50-million-won mark.

Even Ethereum has been increasing, rapidly trading above 2 million won.

Financial industry officials including Bank of Korea Governor Lee Ju-yeol have cautioned over the volatility of the cryptocurrency investment.