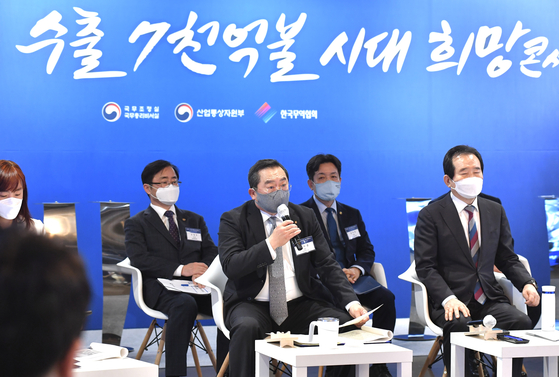 The Korea International Trade Association (KITA), a lobbying group for local export companies, called on the government to include people traveling on business among the priority groups for Covid-19 vaccines on Wednesday.

“As vaccinations started in the country, we expect Korean businessmen to go on trips from the year’s second half,” said KITA chairman Koo Ja-yeol during a Wednesday event at COEX in Gangnam, southern Seoul.

“But there are possibilities that some governments will require a vaccination certificate to enter their countries. Therefore, I request consideration that businessmen who find traveling necessary can be inoculated earlier.”

This was Koo’s first public appearance as KITA chairman since he took the position last month.

Koo is also chairman of LS Group, a mid-sized conglomerate in cables, energy grids and machinery, and is the first businessman to be appointed KITA chairman in 15 years. His predecessors had all built up careers inside the organization.

“Covid-19 has changed the way people live, shaken up industries and international relations — things will never be the same,” he added. “At a transitional time, KITA and the government will work with local firms to realize innovation in product, marketing and digital transformation.

On Wednesday, the government announced it would allow a fast-track process for Covid-19 vaccination for short-term business travel. However, each case would have to be individually approved by the relevant offices and the Korea Disease Control and Prevention Agency.

The government announced the same day that it would invest 5 trillion won ($4.4 billion) through 2025 to develop export items. One field was bio health, where the government pledged to inject 1.6 trillion won to be used for developing new drugs and medical equipment.