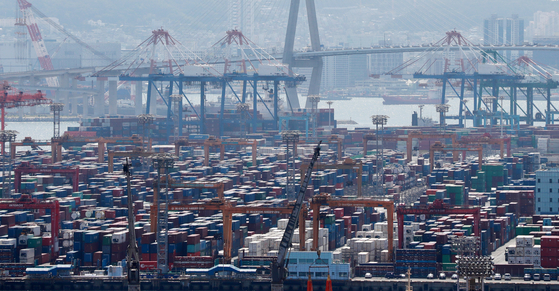 Containers fill a port in Busan on June 1. [YONHAP]


Biopharmaceutical and appliance exports are expected to decline in the second half, according to a survey of brokerage firms by the Federation of Korean Industries (FKI).

The industry group surveyed the heads of 12 local brokerages on their outlook on 15 product categories that lead exports.

Korea’s trade performance has been robust in recent months. Monthly exports increased for seven months straight to reach $50.7 billion in May. This represents a 45.6 percent increase on year, the largest on-year jump in 32 years.

According to the FKI study, the base effect was a major factor in the dramatic jump.

“Korea has been setting new records in trade performance despite the coronavirus pandemic not having reached an end, but we don’t know when a new crisis will arrive,” said Kim Bong-maan, FKI’s head of international affairs.

By item, analysts are most pessimistic about biopharmaceutical products. Six out of ten respondents said there will be a rapid fall in demand for the products in the second half. They forecast demand for Korean Covid-19 test kits to wither due to the increase in the number of vaccinated people.

More than half of the respondents said that appliance and computer exports will fall later in the year, as current demand is underpinned by study-at-home and work-at-home orders.

Rechargeable battery, vehicle and semiconductor exports are forecast to remain strong as global demand is seen as firm.

As core components in electric vehicles, rechargeable battery exports are expected to be in high demand for the longest period. Seven out of 10 respondents said Korean batteries will sell well until the second half of 2023 and possibly beyond that point.

“The general opinion was that Korean companies have gained ground in the global EV market—a lead that’s stable enough to give them an advantage over newly-entering competitors,” the FKI said in a report.

Sixty-two percent of respondents said automobile exports will remain strong until the second half of 2022, as demand recovers and EV demand rises.

The outlook on semiconductors was not entirely bright: 63.6 percent said chip exports will increase until the first half of 2022 on strong DRAM demand. But some analysts said DRAM prices may fall from next year.