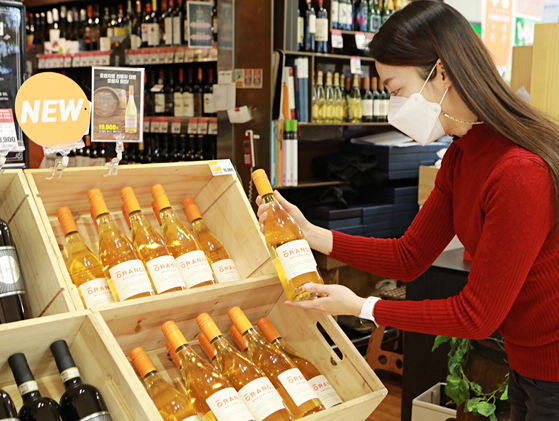 A model looks at a wine at a wine store in Lotte Mart in downtown Seoul. [LOTTE MART]


Koreans drank more at home last year as the coronavirus pandemic forced them to stay indoors.

According to Lotte Mart on Wednesday, its sales of alcoholic beverages last year rose 14 percent compared to the year earlier period. The sales increase was highest for wine, at 53 percent year-on-year growth. Sales of liquor rose 39 percent on year followed by soju, with sales up by 5 percent on year.

So far this year at Lotte Mart, sales of alcoholic beverages increased 37 percent on year and sales of wine jumped by 98 percent. 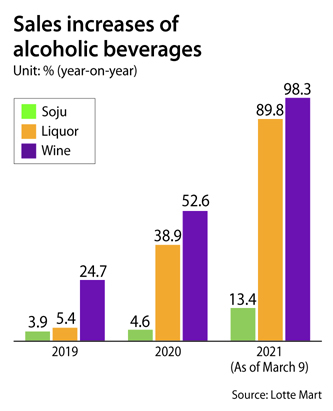 Wine sales in Emart rose by 37 percent, while it grew by 35 percent on year at Homeplus.

At CU, sales of alcoholic beverages were up by 18 percent last year compared to a year before, helped by recent boom in craft beer.

Sales of craft beer skyrocketed by between 450 percent and 550 percent at Korea's three major convenience stores — CU, GS25, and 7-Eleven.

According to a report published by Korea Agro-Fisheries & Food Trade Corporation (aT), alcohol consumers in Korea on average consumed alcohol nine days a month last year. It was 8.5 days the previous year.

As demand rises, retailers are scrambling to increase the available volume of wine in their branches.

Lotte Mart recently increased the size of its wine store in the Seoul Station branch in central Seoul two-fold. Also, in some 10 branches across the country which post the highest annual wine sales — including the Jamsil branch and the World Tower branch in southern Seou l— Lotte Mart designed a separate “wine zone” to offer customers more choices of wines with diverse price options.

Last year, the retailer joined hands with Australia-based Woolworths Group and came up with 15 lineups for Woolworths Wine. All those wines are priced under 20,000 won ($17.60), while one of them is priced only 9,900 won.

Homeplus in the same year collaborated with Australia’s Renmano Chairman's Winery and introduced three lineups for Chairman Wine. Some 160,000 available bottles were sold.

Emart is also catching up at rapid speed.

The retailer named the liquor store in the branch “Wine and Liquor” and has been trying hard to strengthen its wine lineups.

Emart recently added two more wine from Dos Copas Wine to four. The wine was first released to the public in 2019, and some 1 million bottles were sold in only about four months of introduction.

While retailers concentrate on wines, convenience stores are trying to attract more customers with their unique craft beers.

In GS25, the craft beer products only accounted for about 2 percent of all beer products sales in 2018. But the convenience stores increased that by five-fold to 11 percent last year. 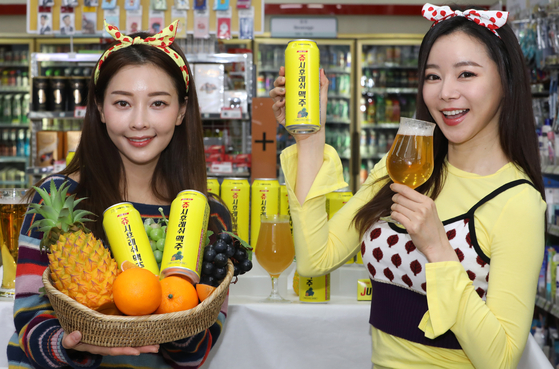 
GS25, which had been launching a series of craft beer themed in Korea’s landmarks such as Gwanghwamun Ale and Jeju Baengnokdam Ale, recently started its new series aiming to bring a sense of nostalgia.

It recently launched a Goldstar Beer designed with the logo of the old company. Goldstar is the former name of today’s LG Electronics.

CU, the convenience store which garnered lots of attention from public with its popular 7Brau Gompyo Wheat Beer, designated some 3,000 branches across the country as alcohol-specialized stores as part of efforts to attract more beer lovers.

In January, CU collaborated with Spanish-based Bodegas Gallegas and came up with mmm! red wine, and a total of 110,000 bottles have been sold in just 40 days.