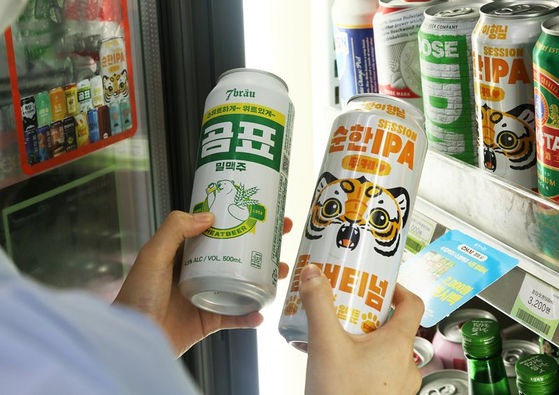 
Korea’s beer industry is booming with the rising popularity of domestic craft beers largely thanks to the growing popularity of homsul, or drinking at home, amid the prolonged coronavirus pandemic.

According to BGF Retail, operator of convenience store chain CU, sales of craft beers between January and October shot up 546 percent compared to the same period a year earlier.

The popularity is led by a series of conceptual craft beers that the convenience store launched in collaboration with breweries and distinctive brands such as a well-known flour company and a shoe polish company.

CU in May teamed up with brewery 7Brau and flour company Daehan Flour Mills to launch a craft beer called 7Brau Gompyo Wheat Beer, commonly known as Gompyo beer. Gom means bear in Korean, and the flour brand is known for its distinctive bear logo.

The first 100,000 cans of Gompyo beer sold out just three days after its introduction, with 300,000 cans sold in a week, according to BGF Retail. Five months after its release, more than one million units have been sold.

Gompyo beer ranked No. 1 in the craft beer category and made the top 10 domestic beer brands by the number of units sold in less than a week after its release.

Unlike other craft beers that are usually popular among people in their 20s and 30s, Gompyo beer was also popular with people in their 40s and 50s — largely due to the Daehan Flour Mills' bear on the label, printed in a retro style that appealed to older drinkers. 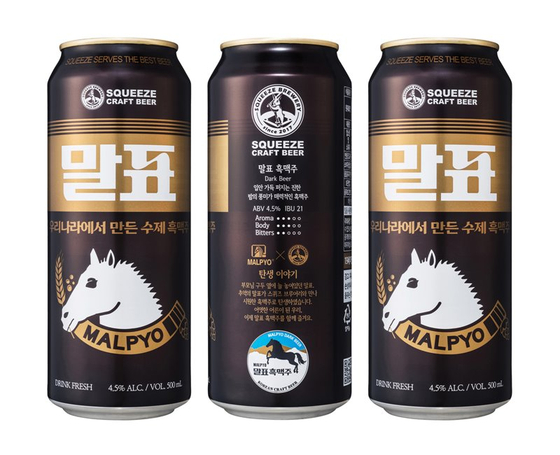 
CU on Aug. 6 launched another craft beer line Muke’s Soft IPA. The beer was made by North Chungcheong-based Platinum Craft Brewing Company and the popular webtoon “Tiger” from Naver Webtoon.


Muke's Soft IPA is a session IPA beer with less than 5 percent alcohol content. The can features the main character of the webtoon, a baby tiger named Muke.

BGF Retail said it aims to target "funsumers" — a portmanteau of “fun” and “consumer” — describing consumers who consider fun as one of the key factors when purchasing products.

According to analysis by CU, the number of people mentioning webtoons and beer at the same time on social media in July soared by 22.4 percent compared to the same period a year earlier.

“We came up with a craft beer lineup collaborating with a webtoon for the first time in the industry targeting customers who enjoy [small and distinct happiness] by drinking a can of beer while reading webtoons after work,” said Lee.

As well as the success of the bear and the tiger, CU also tried a horse. This time, it teamed up with Gangwon-based Squeeze Brewery and a shoe polish company Malpyo Industries. Mal means horse in Korean.

Shoe polish from Malpyo Industries has been a steady seller for nearly 50 years since its introduction in 1967.

The can of beer was designed with the Malpyo Industries logo, an image of a horse, as well as the font that is very familiar to Korean consumers. Malpyo Dark Beer in October ranked fourth in terms of sales, surpassing other popular imported beers such as Qingdao.

“As more consumers are showing interests in craft beer, it has been establishing a strong presence in the beer market with unique designs and tastes,” said Lee Seung-taek, a merchandiser at BGF Retail. “We anticipate that the popularity of Malpyo Dark Beer is likely to grow further during the winter.” 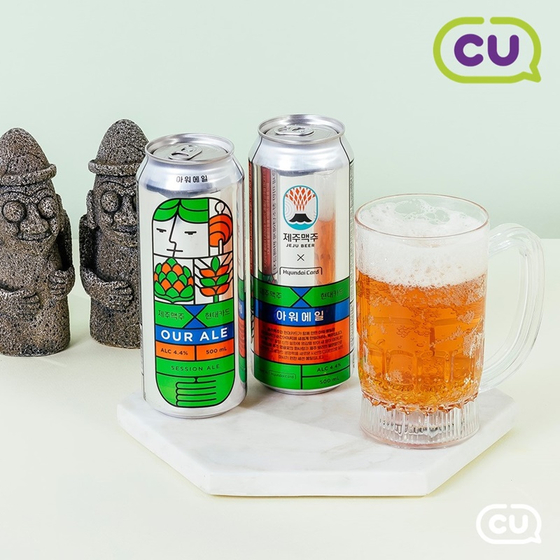 
But animals were not the only focus of CU's craft beer campaign.

The convenience store recently cooperated with Jeju Beer and Hyundai Card to release a craft beer called Our Ale. The three companies jointly worked for one and a half years to come up with the new beer.

Our Ale is themed around a Jeju Island myth about a goddess of immense size and strength named Seoulmundaehalmang, who created the island by shoveling mud from the seabed. Some ancient records refer to this goddess as Samandugo or Seonmago. Halmang means grandmother in Jeju's dialect.

The design of the beer describes the goddess by using the color of blue, green and red, which respectively describe the sea, volcanoes and sun.

The craft beer lineup at CU has doubled this year compared to last year.

According to CU, the domestic craft beer market, which was worth some 88 billion won ($80.7 million) last year, is expected to exceed 200 billion won by the end of the year.

The anti-Japanese sentiment has been another driving force. Korean customers who continue to boycott Japanese products, including popular Japanese beer such as Asahi and Sapporo, are turning their eyes to domestic beers.

In 2017, when the popularity of imported beers shot up, roughly 60 percent of the beer market was dominated by imported beers. Of the remaining 40 percent taken up by domestic beers, craft beer only took some 1.9 percent. With the fast-growing popularity of craft beer, now it takes 9.5 percent — a fivefold increase compared to 2017.

Sales of craft beer at CU significantly jumped since July 2019 when the boycott against Japanese consumer goods reached its peak. Sales of craft beer during the July to December period last year rose 241.5 percent compared to the same period the previous year.

Other convenience store chains are scrambling to catch up. 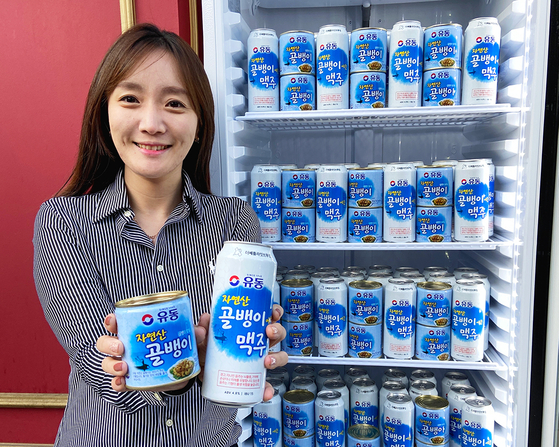 
7-Eleven recently collaborated with Yoo Dong, best known for its canned whelks, to introduce a Vienna Lager-style Whelk Beer. Satellite Brewing, which is known for owning the most craft beer recipes in the country, is in charge of making the beer.

It doesn’t taste like whelks, but targets people who enjoy drinking beer while eating whelks, one of the popular side dishes that Koreans love to eat while drinking.

7-Eleven’s craft beer sales also saw a sharp increase this year. Sales in the January-to-October period spiked 492.4 percent compared to the same period a year ago. The number of brands on offer also grew to 11 from last year’s five.

“The craft beer market has been growing as it is easier to achieve collaboration than other beers,” said Lee Woo-chang, a merchandiser who is in charge of alcohol at 7-Eleven. “We anticipate that craft beer can play a critical role in the sales rise as it is highly valuable in the convenience store market.”

GS25, another convenience store, has been selling a series of landmark-themed craft beers from brewery Kabrew.

GS Retail, operator of GS25, earlier this year started selling a craft beer called Namsan. Namsan Seoul Tower is one of the famous landmarks representing Seoul, the capital city of Korea. It is the fifth beer in the convenience store’s craft beer series.

Earlier beers in the series were Gwanghwamun, Gyeongbokgung — both representing landmarks in Seoul — and Jeju Baekrokdam and Seongsan Ilchulbong, which are both landmarks in Jeju.