Posco chairman approved by shareholders for another term

Posco chairman approved by shareholders for another term 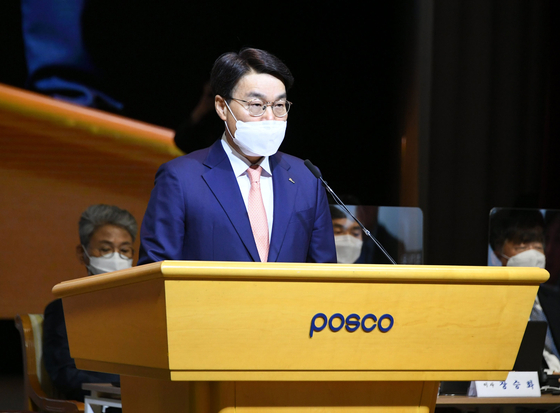 Posco Chairman Choi Jeong-woo was approved by the company’s shareholders Friday to serve for a second term.

That will extend his service by another three years.

On Friday, Posco’s stakeholders also approved the establishment of an “ESG committee,” which will be run by the board. ESG stands for environment, social and governance. The body will come up with plans to cope with changing regulations for a low-carbon society and safety measures and assess the company’s relevant achievements.

The steelmaker also expanded its workforce to enforce safety measures and prevent accidents at its production sites. In the past few weeks, several politicians had protested against Choi’s term extension, claiming the company recorded more accidents and fatalities during his past three years in office.

A “safe environment” division was set up. The team will directly report results to the CEO. The division will have two units - one that develops safety measures and policies at Posco’s steel mills at Pohang and Gwangyang, South Jeolla, and the other that will lay out long-term plans to reduce the company’s environmental impact.